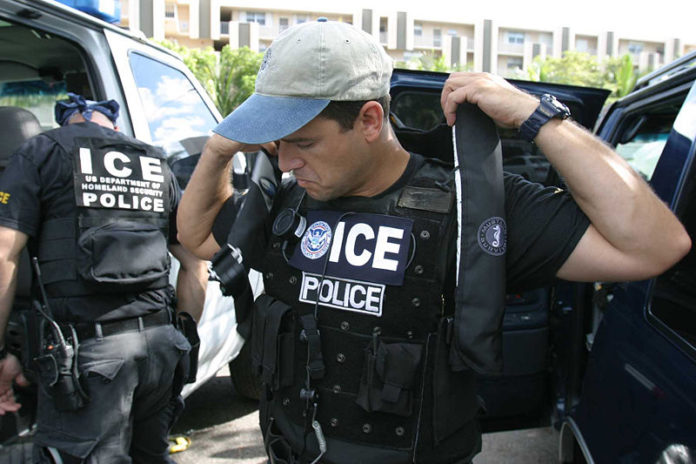 If times weren’t scary enough for undocumented individuals in America, during Immigration and Customs Enforcement’s (ICE) mass crackdowns against these marginalized folks that have commenced around the nation- last week in El Paso An undocumented woman was arrested and detained while in the process of receiving a protective order from a County Courthouse against her abusive partner. She was alleging that she endured domestic abuse at the hands of her partner- and when she reached out for help she was met with punishment.

County officials were disturbed by her arrest, noting that it might leave other undocumented victims of abuse fearful of coming forward. “Our clients come to us at the lowest point in their lives,” El Paso County Attorney Jo Anne Bernal said. Bernal’s office works specifically with victims of domestic violence seeking court-mandated protected orders against their abusers.

“Many of them are so frightened of coming to us because of possible immigration concerns,” Bernal said. She added that ICE allegedly arrested the woman after receiving a tip from her alleged abuser.

“We will do everything in our power to get [victims of abuse] the protection they need,” Bernal said. She explained that immigration status is not an issue that her office looks into before helping victims. Her office is investigating the incident.

Abusers and people with ill intent can now use the simple threat of calling ICE to have leverage over those they seek to control or exploit. ICE seems to be targeting the most vulnerable in society- leaving communities shaken and living in fear. The easier to pick up and deport the better- to ICE its just about the numbers and meeting quotas. Even those who have been approved live and work in the United States despite being undocumented such as those approved under the Deferred Action for Childhood Arrivals program are not safe.

This case begs the question of who is being targeted by ICE. Nearly 700 immigrants were targeted in raids across the country last week, including 23-year-old Deferred Action for Childhood Arrivals (DACA) recipient, Daniel Ramirez Medina who lives in Seattle, WA. An agent reportedly told him, “It doesn’t matter, because you weren’t born in this country.”

If Ramirez was targeted by ICE intentionally, he could be the first DACA recipient detained under Trump’s immigration raids, but his case also prompted questions about the scope of ICE’s powers in detaining and deporting undocumented people.

According to Bernal’s office, the woman who was detained in El Paso had filed three police reports last year, claiming that her partner had punched and kicked her, and chased her with a knife.

El Paso County Judge Veronica Escobar told the El Paso Times, “The fact that this occurred in a protective-order court is shocking to me.”

What do you think the repercussions of this woman’s arrest and detainment will mean for other women in the same situation? Instead of making “America Safe Again” Trump and his administration are driving abused people into the shadows and is giving abusers more power, it is also creating a hostile environment all around where people are suspicious of their friends and neighbors in fear of what may happen if someone reports them to ICE. These raids ICE is conducting are like the literal Gestapo at your door, and many are taking the stance that it is our civic duty friends and neighbors by keeping them safe no matter the cost. What extent would you go to in order to keep your undocumented loved ones safe?