Home News Cops Electrocute Pregnant Teen with 50,000 Volts After She Demands a Warrant... 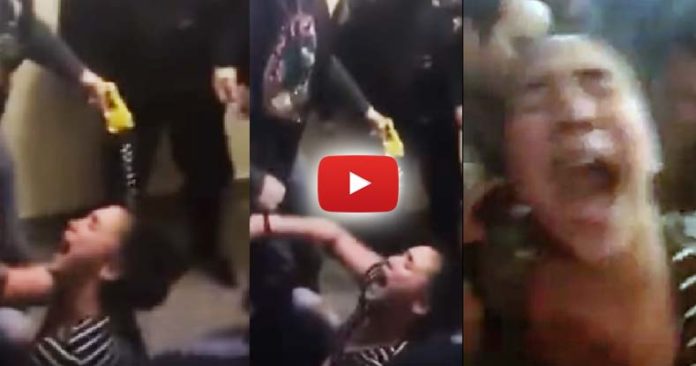 Bronx, NY – In an extremely disturbing video, an NYPD officer can be seen traumatizing a pregnant teen by shocking her with a stun gun. The teen was accused of resisting arrest on Friday night after she refused to let officers enter her apartment without a warrant.

The video evidence clearly shows teenager, Dailene Rosario, 17, who is 14-weeks pregnant, being swarmed by nearly a dozen officers before being taken to the ground with the stun gun.

Rosario says that she informed officers that she was pregnant prior to them electrocuting her and her baby with 50,000 volts.

“I was resisting them because I didn’t do anything wrong,” Rosario told New 12.

According to Rosario’s family police were in their building handling a separate issue on Friday night, but came to the family’s dwelling after Rosario’s boyfriend got into an altercation with her sister’s boyfriend while playing a video game.

When officers came to the residence, Rosario’s boyfriend was no longer there and Rosario was inside her home engaging in an argument with her sister’s boyfriend regarding the incident.

When police attempted to enter the residence, the sisters refused and told them they would need a warrant to enter the home. Police then called for backup.

At this point Rosario attempted to “get a breath of fresh air,” but police intervened and grabbed her.

“The officer said, ‘Oh, since you’re refusing,’ he grabbed my arm and I got pulled into the crowd of cops,” Rosario says.

Officers broke the door to the home down and arrested the sister’s boyfriend while the pregnant teen was being incapacitated and driven to the floor by the 50,000 volts of electricity shocking her — and her unborn baby.

The video, recorded by a witness, clearly shows Rosario being surrounded by officers. As they twist her arm she can be heard telling the cops to “get off me.” Only moments after Rosario tells the officers she is pregnant, a plainclothes officer in a baseball cap electrocutes her.

The fact that these police officers used a stun gun on a pregnant teen, in an effort to force compliance, speaks to the extremely abusive nature of the actions shown in the video. At the point she was tasered, there was no risk of injury to any officer, or that she would be a flight risk. The use of the device in this instance was simply a tactic to punish her to force compliance – something that falls well outside of the police scope of legitimate use.

Rosario was arrested for “fighting,” according to police, and is charged with resisting arrest, obstructing governmental administration and disorderly conduct.

The family says that Rosario sustained bruises to her body during the traumatizing incident, and that they are considering suing the NYPD.

By: Jay Syrmopoulos  From: The Free Thought Project

You Voted For A Reality TV Star – Anti Media News