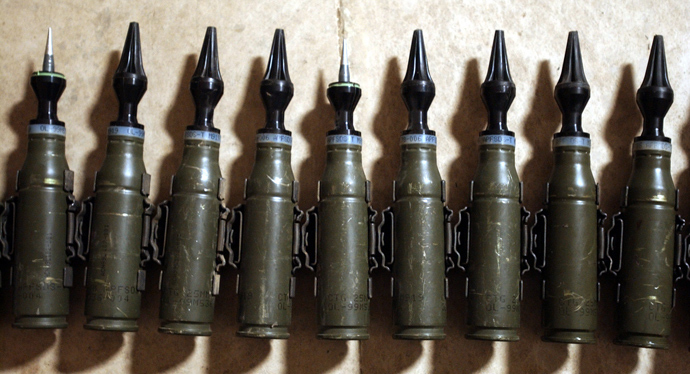 Officials have confirmed that the U.S. military, despite vowing not to use depleted uranium weapons on the battlefield in Iraq and Syria, fired thousands of rounds of the munitions during two high-profile raids on oil trucks in Syria in late 2015. The air assaults mark the first confirmed use of this armament since the 2003 Iraq invasion, when it was used hundreds of thousands of times, setting off outrage among local communities, which alleged that its toxic material caused cancer and birth defects, reported Foreign Policy.

Earlier in the campaign, both coalition and U.S. officials said the ammunition had not and would not be used in anti-ISIS operations. In March 2015, coalition spokesman John Moore said, “U.S. and coalition aircraft have not been and will not be using depleted uranium munitions in Iraq or Syria during Operation Inherent Resolve.” Later that month, a Pentagon representative told War is Boring that A-10s deployed in the region would not have access to armor-piercing ammunition containing DU because the Islamic State didn’t possess the tanks it is designed to penetrate.

It is uncertain if the November 2015 attacks on Syria were in a densely populated area as they were in the Iraq attacks, but the Iraqi government was furious at the U.S. attacks that left many people with cancer and birth defects.

In 2003, hundreds of thousands of rounds were shot in densely settled areas during the American invasion, leading to deep resentment and fear among Iraqi civilians and anger at the highest levels of government in Baghdad. In 2014, in a U.N. report on DU, the Iraqi government expressed “its deep concern over the harmful effects” of the material.

DU weapons, it said, “constitute a danger to human beings and the environment” and urged the United Nations to conduct in-depth studies on their effects. Such studies of DU have not yet been completed, and scientists and doctors say as a result there is still very limited credible “direct epidemiological evidence” connecting DU to negative health effects.

The use of these weapons has received worldwide condemnation and it is considered a terrorist attack against all the civilians in the affected area as well as their unborn children.

The potential popular blowback from using DU, however, is very real. While the United States insists it has the right to use the weapon, experts call the decision to use the weapon in such quantities against targets it wasn’t designed for — such as tanks — peculiar at best.

The U.S. raids were part of “Tidal Wave II” — an operation aimed at crippling infrastructure that the Islamic State relied on to sell millions of dollars’ worth of oil. The Pentagon said the Nov. 16 attacks happened in the early morning near Al-Bukamal, a city in the governorate of Deir Ezzor near the border with Iraq, and destroyed 116 tanker trucks. Though the coalition said that the strikes occurred entirely in Syrian territory, both sides of the frontier were completely under the control of the militant group at the time. Any firing of DU in Iraqi territory would have far greater political repercussions, given the anger over its previous use there. The Nov. 16 video below shows tankers hit first by larger ordnances, before others are engulfed in sparks and ripped apart by fire from 30 mm cannons.

Video of the second DU run on Nov. 22 destroyed what is described as 283 “Daesh Oil trucks” in the desert between Al-Hasakeh and Deir Ezzor — both capitals of governorates of the same names.

One should question why the largest and most advanced military in the world would even consider using cancer and birth defect causing weapons against relatively lightly armed untrained militants that realistically do not even have the ability to fight back.  That is the question, why would they?  Certainly there is no need to use such an inhumane weapon.

Texas Teachers Give Insulting “Awards” To Kids, Including ‘Most Likely to Become a Terrorist’...