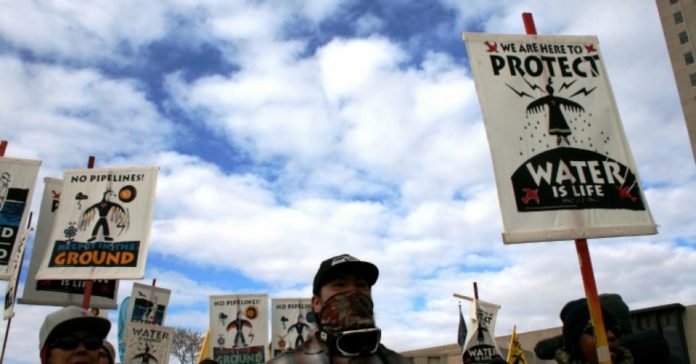 The Oglala Sioux have joined the legal battle against the U.S. Army Corps of Engineers, filing a lawsuit this week calling on the agency to halt construction of the Dakota Access Pipeline (DAPL) until an environmental review can be completed.

Tribal leaders cited fear of water contamination in their lawsuit, which was filed Monday in the U.S District Court in Washington, the same day a federal judge rejected an emergency request from the Standing Rock Sioux and the Cheyenne River Sioux tribes to delay construction.

The action comes ahead of the corps pledging to evict anyone still camping at the main resistance site in Cannon Ball, North Dakota, on February 22.

“After the Corps granted the easement for the DAPL to cross under Lake Oahe and stopped the environmental impact statement process, we really had no choice but to go to court to protect our rights under the 1851 and 1868 Fort Laramie Treaties to safe drinking water,” tribal President Troy “Scott” Weston said in a statement Monday.

The Oglala Sioux are situated in South Dakota, one of the four states the 1,172-mile pipeline crosses. The lawsuit warns that a spill in the Missouri River would violate Indigenous treaty rights, contaminate clean water for more than 200,000 state residents, and bring about other environmental devastation.

President Donald Trump, who took office pledging support for Big Oil, signed an executive order last month instructing the corps to expedite the DAPL approval process—reversing an effort by former President Barack Obama to halt construction until the EIS could be completed.

Kelcy Warren, CEO of DAPL’s parent company, Energy Transfer Partners, has previously referred to the water protectors and other pipeline opponents as terrorists.

Resistance to the pipeline has been ongoing since last summer, with more than 200 tribes from around the country supporting the front-line efforts in North Dakota led largely by the Standing Rock Sioux. That tribe was also in D.C. court this week, filing a motion to overturn the Lake Oahe easement.

By: Nadia Prupis  From: Common Dreams