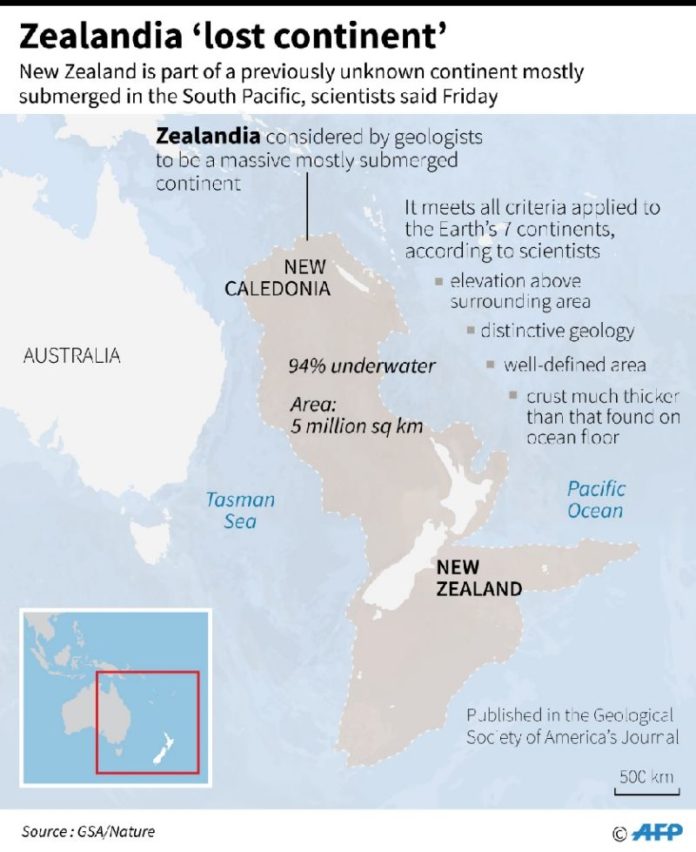 Scientists have been searching for data for decades, but have only recently made an amazing announcement about the existence of an 8th continent.

New Zealand sits atop an underwater continent, mostly covered by the Pacific Ocean and should be recognized by the name “Zealandia”, scientists said Friday.

AFP reported researchers said Zealandia was a distinct geological entity and met all the criteria applied to Earth’s seven other continents — elevation above the surrounding area, distinctive geology, a well-defined area and a crust much thicker than that found on the ocean floor.

The paper said the newly discovered continent has 3 major land masses, New Zealand’s North and South Islands to the south, and New Caledonia to the north.

AFP said the scientists, mostly from the official New Zealand research body GNS Science, said Zealandia was once part of the Gondwana super-continent but broke away about 100 million years ago.

“The scientific value of classifying Zealandia as a continent is much more than just an extra name on a list,” they wrote.

“That a continent can be so submerged yet unfragmented makes it (useful)… in exploring the cohesion and breakup of continental crust.”

Lead author Nick Mortimer said scientists have been Collecting data to try to prove Zealandia as a continent for over 20 years, but it has been difficult with much of it hidden under the waves.

“If we could pull the plug on the oceans, it would be clear to everybody that we have mountain chains and a big, high-standing continent,” he said.

Mortimer said he hopes that Zealandia will be recognized as a continent by educational institutions.

“What we hope is that Zealandia will appear on world maps, in schools, everywhere,” he said.

“I think the revelation of a new continent is pretty exciting.”