Home Government Kid Rock Being Considered For Senate Run, What Are His Foreign-Policy Views?... 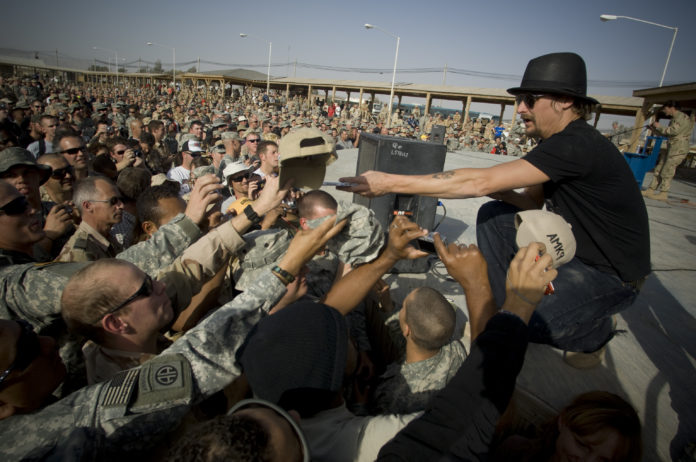 Michigan Republicans are reportedly considering a Senate run for country and rock music star Kid Rock who loves to “sit in the backyard sun and drink beer with dad,” according to his autobiographical song, “Drinking Beer With Dad.” Once unthinkable, Kid Rock for Senate is hardly unthinkable now: A professional wrestler has served multiple terms as governor of Minnesota, Christine “I dabbled in witchcraft” O’Donnell ran for the GOP Senate seat in Delaware in 2010, and the Reality TV Star Donald Trump became president in November, reported Foreign Policy.

Michigan is where he calls home, and some Republicans think he’d be an excellent candidate to represent the state.

It wouldn’t be the self-proclaimed “King of White Trash’s” first foray into Republican politics. Rock was one of the first (and only) prominent celebrities to back Trump in his presidential bid, after initially supporting failed presidential candidate Ben Carson.

Rock, whose real name is Robert James Ritchie, hasn’t made his foreign-policy views known in detail, and his publicist did not respond to several requests from Foreign Policy for an interview or clarification of the rocker’s stances on international affairs. So we are left to puzzle over his public statements to try and piece together what a Kid Rock Doctrine might look like.

FP lists a few of the things that Ritchie has done or said that give some insight into what kind of leader he might be, including assault, battery, his support for Trump, and his opposition to health insurance for the needy.

Be it North Korean leader Kim Jong Un or Mötley Crüe bassist Tommy Lee, we can surmise that Rock is a true “American Bad Ass” who will never back down from a fight, which could set him apart from many of his colleagues in the upper chamber. When Tommy Lee sent Rock a bunch of “horrendous” messages using the Blackberry of his estranged wife, Pamela Anderson, Rock didn’t hesitate to clock Lee at the MTV Video Music Awards in 2007.

He’s likely strong on defense. His official biography states he is a “passionate supporter of those who serve in the US armed forces.” He also told the Guardian in 2015 he liked weapons and owned many, including a “Civil War cannon.”

Like Trump, the rock star may not be too bullish on supporting U.S. allies in Europe, however, if past statements are any indication. Kid Rock called the European dream his “nightmare” in an interview with Fox News in 2010, saying the American dream wasn’t what it used to be.

“It just reminds me of Europe,” he said. “I have nightmares that I’m going to wake up and everyone’s driving a Prius and living in a condo and we’re all getting health insurance.”

If he were to run for office, though, he would have to mind the obligatory baggage, including legal troubles. In 2005, he was charged with assaulting a DJ at Christie’s Cabaret, a strip club in Nashville. And in 2007, he was charged with battery for his involvement in a brawl at a Waffle House restaurant. Luckily, he’s already gotten his peccadilloes out of the way: His infamous sex tape, which hit the internet ages ago, is already old news.

He wouldn’t be the first celebrity to run for office, or even to win. Arnold Schwarzenegger served as governor California. Ronald Reagan was U.S. president from 1981 to 1989. Actor/Wrestler Jesse Ventura served as Governor of Minnesota from 1999-2003. Reality TV Star Donald Trump was recently elected as President. Actor Al Franken is currently serving as a senator for Minnesota, and rapper Waka Flocka Flame ran a failed presidential bid in 2015.

However, like Trump, he gets very offended and combative when anyone criticizes him.

“The problem I got is when people are like, ‘F*ck Kid Rock, he’s a piece of sh*t, white-trash whatever.’ I’m like, ‘You wouldn’t say that to me in a f*cking bar. You’ll get your f*cking wig peeled back. So don’t sit behind your computer and type it,’” he said in a 2011 interview.

Ritchie told The Guardian about his standard computer usage in 2015.

Oil Has Been Spilling Into The Pacific Since Last Month And It’s Been Totally...