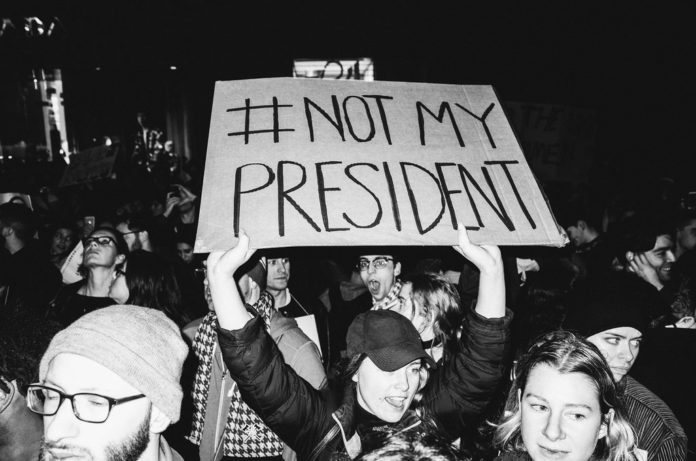 Instead of travel plans over the long weekend, many Americans are taking to the streets this President’s Day in protest of the Trump administration transforming the holiday into Not My President’s Day.

These resistance efforts are in response to “the Trump White House and its increasingly fascist agenda.” Across the nation, creative groups, non-profit organizations, and grassroots activists will take to the streets to convey the message that while Trump may be the President of the United States, his bigoted values and that of his administration are not in line with American democracy and are those that violate the American constitution- and for that he should be removed from office.

As reported on Alternet:

Many of the actions organized in cities across the U.S. include calls to impeach the new president.

As Donald Trump defiles American values left and right, spouting lies, demeaning the free press, attempting to barrel over the checks and balances that preserve the nation’s integrity, threatening to reinstate the worst Nixonian policies (like the racist war on drugs), and terrorizing immigrant and Muslim families, thousands of people have sacrificed their three-day weekend to gather and protest in U.S. cities.

On Saturday, New Yorkers held a mock funeral for the U.S. presidency, while in Los Angeles and Dallas, thousands marched in support of immigrants and refugees.

Many Americans are fed up with the direction Trump is steering the nation to, and will not sit idly by as he transforms the United States into a bigoted regime.

As the actions continued through the weekend, in Salem, Oregon an Immigrants’ March had folks from all 50 states to fill the steps of their capitol building in support of immigrants’ rights.

The march was a response to Trump’s anti-immigrant policies, including his proposed wall along the U.S.-Mexico border and the so-dubbed Muslim travel ban that would keep residents of seven predominantly Muslim nations from entering the U.S.

Also Sunday, more than 5,000 people were expected to take to the streets of Chicago for a one-month post-inauguration protest called Stop the Trump Agenda.

What are your plans this President’s day? Are you in one of the many cities organizing marches or demonstrations? How do you feel about protests as agents of change? Let us know in the comments below.

“US Backed Plan for Chemical Weapon Attack in Syria to Be Blamed on Assad”...

Federal Civil Rights Indictment For Officers Who Beat Men And Lied About It –...

Capitol Murder Charges For Man Who Beat 3 Year-Old To Death Over Math Questions...