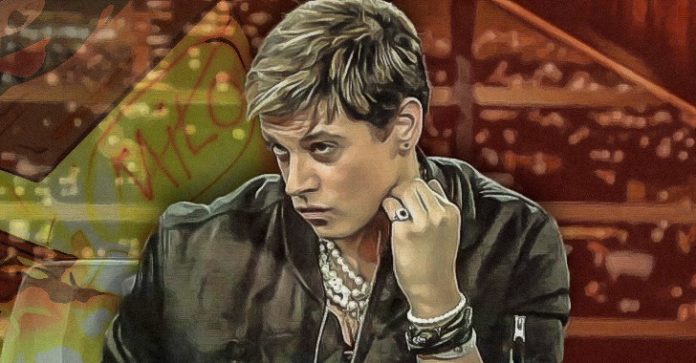 Milo Yiannopoulos has become the poster child of the alt-right, anti-pc culture. At first glance, the rest of the world might want to breathe a sigh of relief. After all, the hard right anti-establishment fringe has accepted a gay immigrant Jew. The times are changing, right?

Not even close. Milo Yiannopoulos is exactly what those in the alt-right have always needed, a pretty boy face to package their hate. See, he loves to say he’s Jewish when it suits his needs. His mom is Jewish, but he identifies as Catholic. He also loves touting the fact that he’s an immigrant. Of course, when was the last time you ever heard a bigot complain about lily white English-speaking European immigrants (even if they did leave their home country amid a flurry of accusations about bad business practices)?

It’s not like someone should call him a sell out to his Jewish heritage or anything. Somebody would have to wear Nazi paraphernalia like an Iron Cross, or perhaps pose with books about Hitler to be really considered a sell-out. Or maybe if he posted memes celebrating the number of Jews killed during the Holocaust while using a fake name paying tribute to a composer favored by Nazis. Oh, that’s right, he allegedly did that. All of it. He can’t really be a Nazi, though. He’s gay. Tell that to Ernst Rohm, the SA leader who was known for his all-male orgies.

So he’s an exploitive sell-out taking advantage of bigoted right-wingers. Who cares? It doesn’t end there. He’s not anti-establishment. He’s a statist to the bone. While he cries out against those he sees as violent thugs or those who need the government to take care of them, he’s both of those things.

He’s currently on a tour encouraging students to rat out their fellow classmates to the feds for the horrid crime of not having an in-status visa. He’s the flamboyant smiling face of the U.S. surveillance state. He’s literally a fed snitch recruiter. If you opposed the NSA surveillance state and support this clown, you need to reexamine your beliefs.

Is there a more thuggish behavior than snatching up those who are seeking a higher education, throwing them in a cage, and then shipping them off? It’s pretty reprehensible. The only thing that makes it worse is that he’s too cowardly to do it himself. He needs big daddy government to come in and take care of him and his fellow snowflakes, who are far too delicate to be subjected to free speech if it has a Latin American accent.

One of the men most hated by those on the right is George Soros. The most common complaint is that he collaborated with the Nazis to sell out his own kind during World War II. Now the right is rallying around a man who professes to be a Jew while wearing an Iron Cross and selling out his fellow immigrant. It would be funny if it weren’t so sad.

As Tennessee considers the “Milo bill,” it should heavily consider if Rep. Martin Daniel and Sen. Joey Hensley’s proposal is protecting free speech or enabling a government crackdown and furthering the federal surveillance state.

(by Justin King for TheAntiMedia)

After Saudis Beheaded 47 People, Belgium Now Refusing To Sell them Arms, Germany May...

Don’t Give In To Coup Fantasies; Power Is More Straightforward – Anti Media News