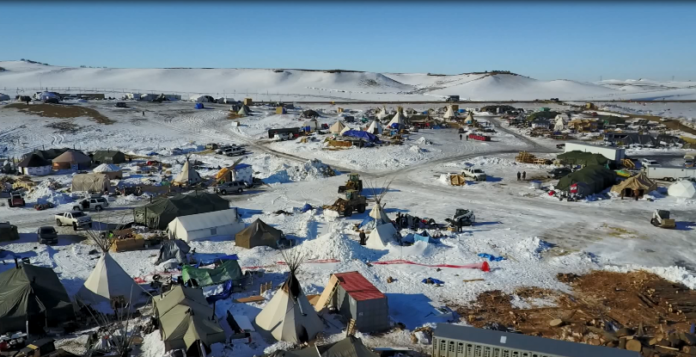 This could be the last day of the Oceti Sakowin camp resisting the DAPL that is being installed through the land and water guaranteed to the tribe in an 1851 treaty. Those that remain have requested immediate assistance. This struggle is about more than just this pipeline, it is about the rights of indigenous people and the rights of all U.S. citizens. It is about unchecked police brutality against innocent, unarmed peaceful people.

On Feb, 15, Governor Doug Burgum issued an evacuation order for the camp. He did it under the guise of safety of the protesters, just as the previous evacuation order during winter was for their safety. They refused to leave last time, what will happen this time?

Jihan Hafiz of The Intercept reported, “As the governor’s press conference was taking place, Morton county police moved closer to the camp’s south gate and set up a roadblock. Oceti Sakowin was on high alert for hours. “They don’t understand people are willing to die here,”a 90-year-old woman told The Intercept. “They don’t understand we will not back down. We have our ancestors with us and we are in prayer that Tunkashila (Great Spirit in Lakota) will guide us in our freedom.”

The following day, officials from the Army Corp of Engineers met with Oceti residents about assisting in cleanup and the pending February 22 evacuation deadline. “The goal here is that we work together to clean the camp and then everyone leave the area peacefully and go some place safe,” said one of the officials.

Camp leaders and residents were very skeptical about their intentions, especially in light of the army corps refusal to do the legally required environmental impact study and their rejection of the legally required tribe consultation on the DAPL project. Although many did not want the Army Corp inside the camp, they were allowed in with members of Oceti’s security personnel.

Hafiz reported on her time at the camp:

By Friday, tribal police set up a check point. As we tried to enter, we were interrogated about bringing supplies into camp, including food.

Throughout the day, there were multiple incidents of harassment from the authorities. At one point, the South Dakota state patrol drove into the main roadway in front of camp and exited their vehicles with non-lethal weapons. After a tense standoff, the police moved back to their side of the barricade.

That night, Oceti residents packed into one of the main kitchen halls to discuss the possibility of a violent raid and whether people should evacuate. After the meeting, loud drumming resounded throughout the camp. Spiritual leaders went into ceremony as young Natives drummed and sang sacred songs all night. Calls on the camp radio requested Oceti’s residents to remain in prayer, reminding all those who have chosen to stay that they will not back down.

Some of the protectors have chosen to remain at the camp, and they have asked for immediate help. This could be the end of the camp, which is located on native land guaranteed by an 1851 treaty with the federal government.

Orwell’s Lessons for the Era of Trump – Anti Media News

Mom Violently Attacked by a Cop while Picking Daughter Up from School, for Parking...