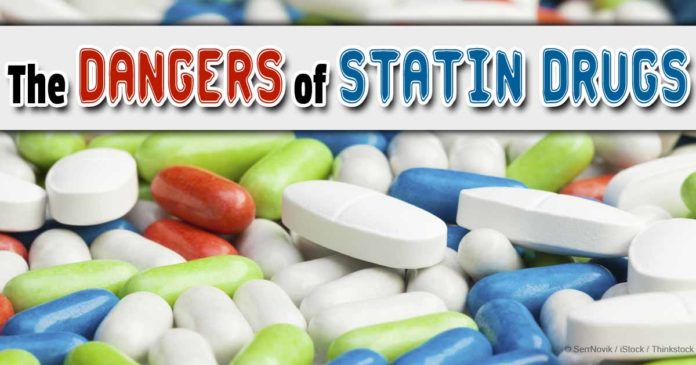 Statins are prescribed to patients who suffer from high levels of “bad” cholesterol, because it lowers the harmful levels, and reduces the risk of having heart issues, but many do not consider the side effects of the drugs.

Lately, statins have been under fire as a study concluded that they do more harm than good. Examples of statin drugs are Crestor, Lipitor and Zocor. In the United States, prescription drug spending rose to $374 billion in the year 2014 (the highest level of spending since 2001).Statins make up a large portion of that amount.

The American Journal of Physiology, conducted a study that states that statins “…impact on other biologic properties of stem cells provides a novel explanation for their adverse clinical effects.” Specifically, the study states that such adverse effects include advancing the “process of aging” and also notes that “…long-term use of statins has been associated with adverse effects including myopathy, neurological side effects and an increased risk of diabetes.” Myopathy means skeletal muscle weakness.

In the study, experts suggest that the health issues incurred due to statins, have been downplayed in the recent years. People who do take these drugs usually report having fatigue, cataracts, muscle pain, liver damage and loss of memory. These drugs have been proven to mess with cells in a way that heir main purpose is to reproduce and the process of body repair is blocked. Professor Reza Izadpanah, stem cell biologist and lead author of the published study, states, “Our study shows statins may speed up the aging process. People who use statins as a preventative medicine for [health] should think again as our research shows they may have general unwanted effects on the body which could include muscle pain, nerve problems and joint problems.”

Side Effects Of Life has a more comprehensive list of side effects of the harmful drugs:

Despite health problems linked to statin drugs, the FDA says people shouldn’t worry about it.

While the FDA website says “Cognitive (brain-related) impairment, such as memory loss, forgetfulness and confusion, has been reported by some statin users” and that “People being treated with statins may have an increased risk of raised blood sugar levels and the development of Type 2 diabetes,” they also maintain its safety and effectiveness.

The site recommends the advice of Amy G. Egan, M.D., M.P.H., the deputy director for safety in the FDA’s Division of Metabolism and Endocrinology Products (DMEP). She says, “This new information should not scare people off statins. Their benefit is indisputable, but they need to be taken with care and knowledge of their side effects.”

This is of course ridiculous.  The long list of side effects can be avoided by eliminating the”need” for statins through a healthy diet and lifestyle.

Organic and Healthy reported these findings have opened up the importance of researching the benefits of prescription drugs, which is hopefully something people will continue to do, to stay well-informed and in the best shape possible. There was a similar study that opened up many eyes, and involved the adolescent antidepressant “Paxil”, which made headlines when a re-analysis of an original study had shown incomplete information and exposed all the errors. Although, in reality, this drug wasn’t found to not be safe and efficient for its recommended demographic. Brian Nosek, a professor of psychology at the University of Virginia says “signals that the community is waking up, checking its work and doing what science is supposed to do — self-correct.”

In his typical push for big businesses, Trump has called for fewer regulations on the drug industry. It is likely problems like these hidden side effects will only get worse in the future, so it is more important than ever to reevaluate your diet and lifestyle so you do not become a victim of the drug companies.

Forced Oral Sex Is Not Rape If Victim Is Unconscious From Drinking – Anti...