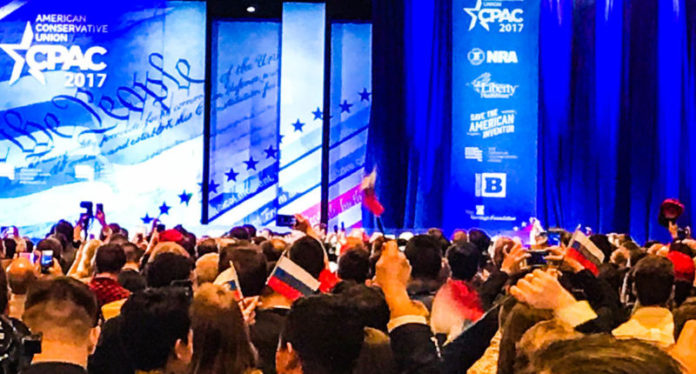 Staffers at CPAC, The Conservative Political Action Conference, quickly tried to confiscate Russian flags with the word “TRUMP” written on the front that were being waved by audience members during President Donald Trump’s speech on Friday.

Reporter Peter Hamby said that CPAC staffers quickly realized that its attendees were waving Russian flags, and moved to confiscate them.

Crowd at CPAC waving these little pro-Trump flags that look exactly like the Russian flag. Staffers quickly come around to confiscate them. pic.twitter.com/YhPpkwFCNc

A section of people in the back of #CPAC2017 waving Russian flags — a staffer just came and demanded they all be handed over. pic.twitter.com/mZVoVUqudn

No joke, someone has been handing out Russian flags that say #Trump on them. And people are waving them.#CPAC2017 pic.twitter.com/CDZS5oEqyL

In addition to the Russian flags, journalist Sarah Posner said at least one attendee was spotted wearing a “Make Russia Great Again” t-shirt.

Police Warn Protestors: Texas Gun Owners Can Shoot If You Mess With Our Statues