Home News Baltimore Cops Assault 16 yr Old Who Was Threatened With A... 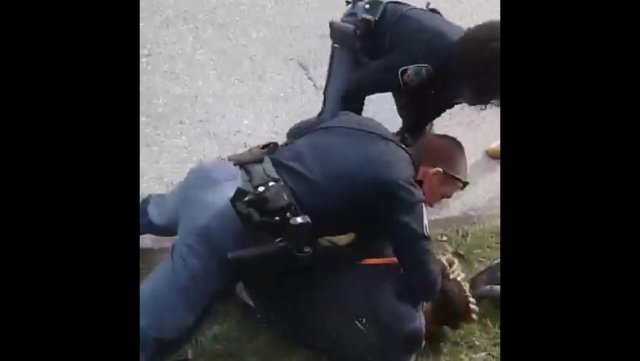 Police officers in Baltimore, Maryland beat and arrested 16 year old Alonzo Cox on Wednesday night. Cox  was being threatened by 14 year old female with a knife when police arrived. Police assaulted the boy when he did not want to put on handcuffs.

In a video below cops are trying to take 16-year-old Alonzo Cox into custody. Just before that the teen was threatened with a knife by a 14 year old female. Why the cops wanted to arrest the victim is not clear. In the beginning of the video a female cop can be seen throwing handcuffs to the ground. Shortly after a male cop can be heard threatening to punch the teen. An eyewitness than says “Why are you hitting him?” The video also shows that Alonzo tried to protect his head.

Alonzo told Fox Baltimore he could have cooperated more, but said he began to fear for his life.

“I was scared,” he said. “I thought I was going to get shot that’s all that was going through my mind, ‘please don’t shoot me’,” he added, “I was scared for my life.”

Police were called to the scene around 2:36 p.m. on Wednesday after reports of a large fight involving a knife. When officers arrived, they reported witnessing a female suspect matching the suspect description walking on Woodlawn Drive, swinging a “large knife” and yelling at the male teen ahead of her.

“Officers approached the girl, who is 14, giving verbal commands to which she responded,” Baltimore County Police and Fire Spokesperson Elise Armacost wrote in a statement. “The girl was taken into custody without incident. The male juvenile who had been identified as a suspect in the fight did not comply with a female officer’s verbal commands and assaulted her.”

The Baltimore police department is investigating the actions of 2 of their fellow officers.