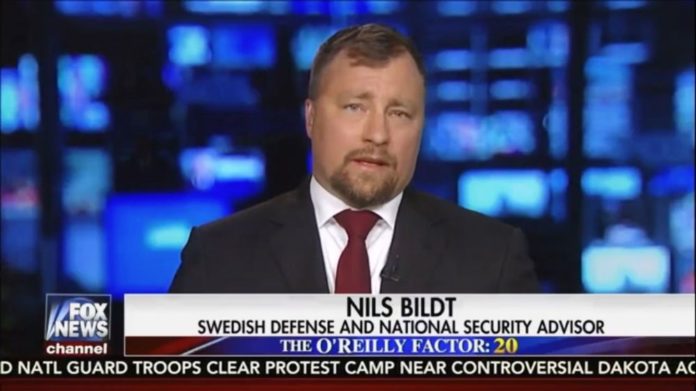 Fox News has taken a Swedish man with no ties to Swedish government whatsoever and called him a “Swedish Defense and National Security Advisor.” He followed the Trump/Fox News agenda of spreading false information, aka “Fake News,” to vilify immigrants.

As Fox News continues to weigh in on the debate about how immigration is killing Sweden, A guest last night spoke about the problems caused by criminality in Swedish cities and suburbs. But neither the Swedish Defense Ministry nor Foreign Office have heard of the “expert.” Nils Bildt, who called for an “open and honest” debate on crime, has previously been convicted of a violent crime in the United States reported Dagens Nyheter.

President Trump’s fake terrorist attack on Sweden, based on a report Fox News, continues to drive the debate about the country in the United States. Sweden is portrayed as a nation plagued by crime and rape, in large part due to immigration.

This was the topic during the Bill O’Reilly show, where Nils Bildt agreed with Donald Trumps negative view of Sweden. Nils Bildt was labeled by Fox as a ”Swedish defense and national security advisor”, which is a total fabrication and a perfect example of “fake news.”

Marie Pisäter at the Swedish Defense Ministry says that no-one called Nils Bildt works there. ”We have no spokesman by that name”, she said. The Foreign Office also denies that he works there. ”We do not know who he is,” reported DN.

So who is Nils Bildt?

Nils Bildt is the son of Sven Tolling, well know in Swedish equestrian circles. Nils Bildt emigrated from Sweden in 1994. Nine years later he changed his last name from Tolling to Bildt, and he now runs several security companies in the United States. His last known address, according to Swedish registers, is in Tokyo. It is unclear if his companies are still in business.

Nils Bildt, who spoke on Fox News about crime in Sweden, is convicted of a violent offence himself, according to documents from Arlington General District Court in Virginia. Bildt was arrested on the 19th of June, 2014, for assaulting a law enforcement person and for obstruction of justice, after threatening an official. He was sentenced to one year in prison on the 10th of November the same year. He was also convicted of public inebriation at the same time. Nils Bildt, in an e-mail to DN, says he is ”unaware of the allegations” and therefore cannot comment.

Nils Bildt sent a short e-mail to DN  on Friday, explaining why he was given the title of ”Swedish defense and national security advisor”: ”I appeared on Bill O’Reillys’s show on Fox News. The title was chosen by Fox News’s editor – I had no personal control over what title they chose. I am an independent analyst based in the USA”, he wrote.

Johan Wiktorin, a former defense analyst at the Military Intelligence and Security Service, says that he has never heard of Nils Bildt. ”He is unknown in Sweden as an expert on national security. The depiction of Sweden as a problem country in American media is a disturbing trend.”

We must consider how weak and unsubstantiated the president’s position is on the evils associated with immigrants if he and his supporters feel the need to spread so much fake news to support their cause. If Trump was actually right on this topic, he would not need to lie to support his position.

WATCH: “Why Did They Shoot Me?” – Unarmed Student’s Last Words as Cop Executed...