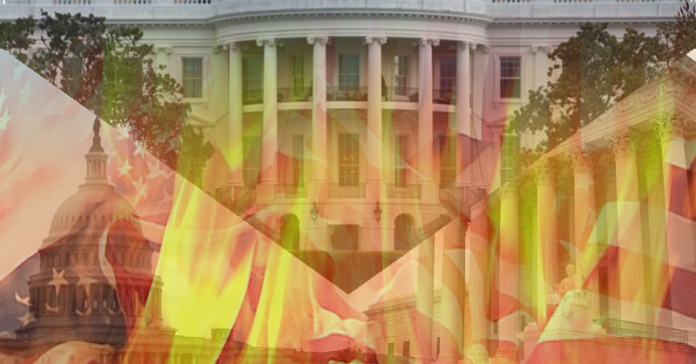 Mickey Edwards was member of Congress who served Oklahoma’s 5th congressional district from 1977 to 1993. Afterward, he taught courses on politics and the Constitution at several universities.

Writing for Politico, Edwards believes that America’s three-branch system of government, and the separation of powers under the United States Constitution, is now a thing of the past.

On the Legislative Branch:

In the days after Donald Trump’s election, even after the new Congress was sworn in, congressional leaders waited eagerly to receive direction from the incoming president on budgetary, and even legislative, priorities. It is, at this point, a familiar pattern. When Barack Obama was president, Congressman Steve Israel, who had been tasked with overseeing House Democrats’ messaging, noted that Obama was, in fact, “our messenger in chief.” To a considerable extent, Republicans and Democrats in Congress have taken to seeing themselves not as part of a separate and competing branch of government, but as arms of their respective political parties…

Americans have become accustomed to seeing Congress—especially when it’s controlled by the same party that holds the White House—wait for presidents to submit their proposed federal budgets before beginning serious discussions about spending decisions. But presidents prepare national budget proposals not because they are entitled to tell Congress what to do, but only because Congress has tasked the president with doing so in order to give the legislature a better sense of his thinking—and give members of Congress the chance to gather the information they need from the executive branch to decide how much to spend (and on what) and whether to increase taxes to pay for it. By stripping itself of sufficient resources to compete with the executive, Congress has made itself not the parent of the national budget, but a secondary player often forced by its own inadequacy to tinker at the edges with what presidents demand.

On the Judicial Branch:

Of course, there remains another branch of government which, like the Congress, is theoretically and constitutionally separate and independent. But in reality the separateness is a bit fuzzy. That’s because even in this age of hyperpartisanship, there is at least one important area in which Democrats and Republicans think alike: both parties view the federal courts, and especially the Supreme Court, not as a neutral, Constitution-bound, arbiter, but as a de facto branch of the legislature.

Whether by a president, presidential candidate, or member of Congress, potential jurists are evaluated not on judicial temperament, quality of reasoning, or other examples of what were once considered “judicial attributes.” Today, the dominant question is how a nominee for the court will rule on controversial political questions. Last year, both Hillary Clinton and Trump, like presidential candidates before them, announced, as a part of their political campaigns, a “litmus test” for potential court nominees.

While many previous Supreme Court nominees were confirmed by the Senate with little or no dissent, Democrats and Republicans in today’s Senate announce their support or opposition at the instant of the nomination’s announcement—often even before a specific nominee is chosen—in anticipation of how the nominee will vote on questions of abortion, immigration, regulations, firearm ownership, and so on. Whether Merrick Garland or Neil Gorsuch, the question is not whether the nominee is qualified to function judicially, but whether he or she is “one of us”—that is, a fellow liberal or conservative. Each Supreme Court nominee is viewed as if he or she were to be a 101st vote in the Senate.

America’s system of checks and balances was put in place by the Founders to make sure no one branch would be able to control too much power. Today, we no longer have three branches that check the power of each other. We have two branches: A President and his supporters in Congress and in the courts, and an opposition party with its opponents to the President.

Edwards closes with this stunning quote:

I taught my students a system of government based on the Constitution. I thought I was teaching about current events. Instead, I now realize, I was teaching ancient history.