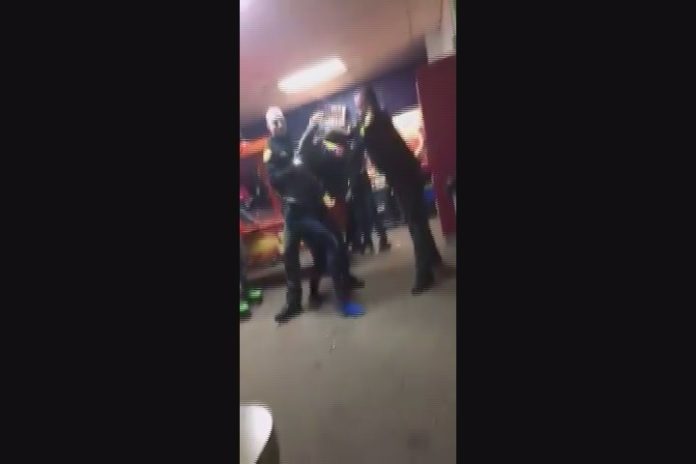 Sheriff’s deputies in Colerain Township, OH who got caught on video using a Taser on a 12-year-old girl said they were following “proper procedure”.

According to WCPO, Hamilton County Sheriff’s Office spokesman Mike Robison said the unnamed girl was out of control and attacked the deputies after being asked to leave the premises of The Skatin’ Place on Saturday night.

After the deputies were apparently unable to control the 12 year old girl, the video shows the two deputies manhandling and throwing her to the floor, then using a Taser to subdue her. After the video was uploaded to social media, people demanded to know why the officers used a taser on a 12 year old girl.

Fox19 reported on the details of the incident:

Robison said the 12-year-old was asked to leave the establishment several times by the business. Deputies then told her to leave and “using extremely disrespectful language she vehemently refused to comply,” reads a press release.

“When the Deputies attempted to escort her from the premises, she struck a Deputy twice in the face, and proceeded to continue to kick both Deputies.  She was given several verbal commands to stop resisting which she also ignored,” stated the press release.

A stun gun was used on the back of the girl’s leg one time, said Robison.

The girl was checked for any injuries and had no marks on her body due to the stun gun, according to Robison.

She was taken to the Hamilton County Juvenile Detention Center and charged with two counts of assault on an officer, resisting arrest and disorderly conduct.

According to the Brian Liette with The Skatin’ Place, the girl was asked to follow the rule requiring patrons to wear skates. She was given a time frame in which to put on skates and warned she’d be asked to leave if she did not comply.

The business asked her several times to put on the skates, but she refused. That’s when Liette said Hamilton County deputies became involved.

The Hamilton County Sheriff’s Office maintains a special detail security presence there and has for 15 years, according to Liette.

Watch the video of the incident below:
Cincinnati News, FOX19-WXIX TV

Do you believe it was necessary for these officers to tase a 12 year old girl? If they were actually following the proper procedure, do you believe it needs to b changed? Please let us know your thoughts in the comments section below.