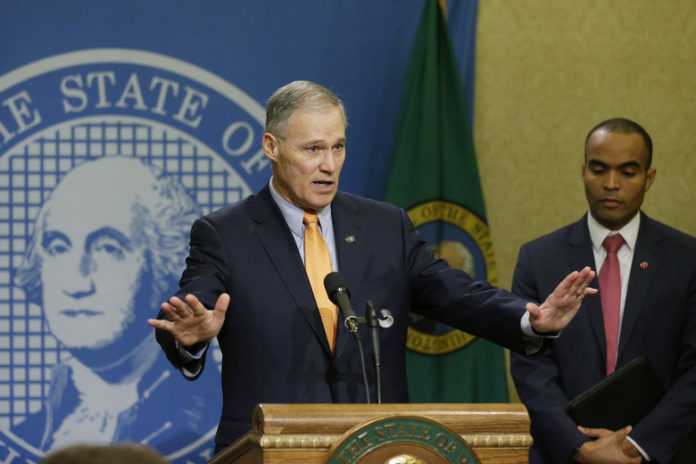 Washington state governor is standing in defiance of trump’s anti-immigrant position and has banned his employees from cooperating with Trump’s policies on rounding up immigrants.

Gov. Jay Inslee signed an executive order that bars the state of Washington’s agencies from denying services to people based on their citizenship or legal status and from helping detain immigrants for breaking civil rules, reported The Independent.

Inslee’s executive order came after memos were released by Homeland Security Secretary John Kelly showing he planned to prioritize the removal of undocumented immigrants who “have been convicted of any criminal offence”, following directives from the President.

This also includes all those who “have abused any program related to receipt of public benefits”.

In defiance of Trump’s immigrant stance, Governor Inslee proclaimed: “Washington will not be a willing participant in promoting or carrying out mean-spirited policies that break up families and compromise our national security and community safety.”

“Our officers are here to keep the public safe by enforcing the criminal laws, not to act as [Immigration and Customs Enforcement] officers or enforce civil violations.”

Inslee still wants Washington to stand for the American ideals, even if the president doesn’t.

He added that it reaffirmed “the state’s commitment to tolerance, diversity, and inclusiveness” and the order was “designed to ensure that all state agencies under my executive authority carry out only those duties and responsibilities prescribed to them in state and federal law.”

He said: “In Washington state we know this: we do not discriminate based on someone’s race, religion, ethnicity or national origin. That remains true even as federal policies create such uncertain times.”

Washington agencies must comply to the extent to which they are permitted under federal law, he said. The agencies are ordered not to collect any more information about people than is necessary to perform their basic duties.

The Guardian reported Inslee’s office said immigrants make up 17 per cent of Washington’s workforce and contribute $2.4bn in taxes.

Mr Kelly has insisted there will be “no mass deportations” during the Trump administration’s immigration crackdown.

He told reporters in Mexico City there would be “no use of military force for immigration operations” and said enforcing new policies would be done legally and with respect for human rights.

It is great to see a governor standing up to Trump’s unamerican immigration regulations. If you would like to see your state do the same, then contact your governor’s office and tell them your thoughts on it. Public employees are your employees as a taxpayer.

‘Billions Of Gallons Of Radioactive Wastes,’ And Now Oil? Battle Goes On To Protect...