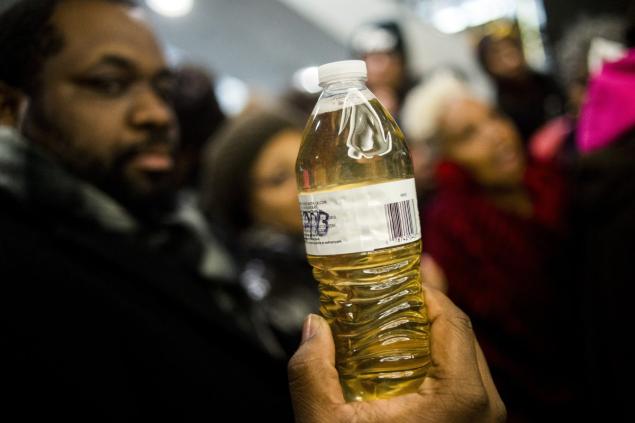 Yet Flint residents still can’t drink the water, and the announcement was met with outrage.

“They want to make it look like they’ve resolved this thing, that it’s fixed,” Tim Monahan, a carpenter who survived Legionnaires’ disease caused by the poisoned water supply, told the Washington Post. “It’s been three years, and we still can’t drink the water.”

Republican Gov. Rick Snyder has appeared eager to declare the water safe. Yet the New York Times reported weeks ago that while the water supply now meets federal standards, because the aged lead-tainted pipes have yet to be replaced it is still not safe to drink.

Residents have also been skeptical of state officials’ claim that the water does, in fact, meet federal regulatory standards.

“They’re not telling the truth about the water testing,” Melissa Mays, a community advocate with Water You Fighting For, told NBC. “They’re saying they’re in compliance, but everyone here has had to learn the Lead and Copper Rule, and they’re not. People are still testing way high for lead, as well as bacteria that the state’s not even looking at.”

At a news conference, Flint Mayor Karen Weaver argued that the state should continue to reimburse residents for their water until they can safely drink it without purchasing a filter. “This is a trust issue, that’s what it is,” said Weaver, according to the Post. Weaver also criticized Michigan officials for giving residents short notice that the water bill credits were coming to an end.

Last year, officials came under fire for threatening to shut off the water supply to Flint residents who were behind on their bills.

By:  Nika Knight From: The Anti Media

Police State Worshipers Cheer On Cop As He Violently Chokes Man for Holding Up...

Forced Oral Sex Is Not Rape If Victim Is Unconscious From Alcohol – Anti...