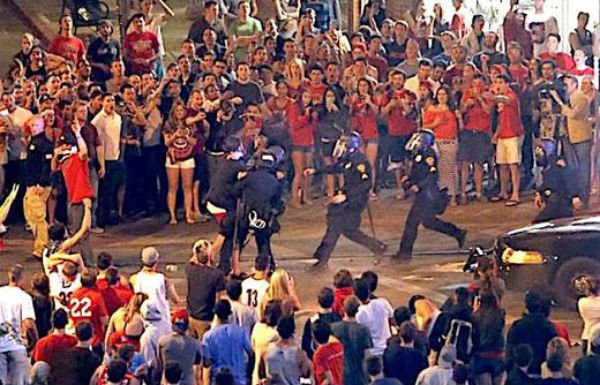 We recently reported on the Arizona State Senate passing a bill, SB 1142,  that would remove people’s first amendment rights and make it legal for the state to seize the assets of any protester who was in any involved in a protest that “disturbed the public peace.” Now we have good news of an update on the case.

The bill has been killed by the Arizona State House because it would have restricted fundamental right set forth in the Constitution of the United States.

House Speaker J.D. Mesnard has confirmed that he does not plan to consider the bill, which means that it won’t move forward in the legislature, reported the Phoenix New Times.

“I haven’t studied the issue or the bill itself, but the simple reality is that it created a lot of consternation about what the bill was trying to do,” Mesnard told New Times. “People believed it was going to infringe on really fundamental rights. The best way to deal with that was to put it to bed.”

With no actual evidence to support their conspiracy theory, supporters of the bill claim violent protesters are being paid to cause mayhem.

SB 1142 was based on some questionable claims. Chief among them: The violence at recent protests in Washington, D.C., and Berkeley, California, was the work of paid protesters.

State Senator Sonny Borrelli, a Republican representing Lake Havasu City, said that his bill was necessary in order to crack down on the groups that are paying protesters.

He garnered support from several groups that supported the fascist, unconstitutional bill based on a conspiracy theory. Senate Republicans and law enforcement all voted in favor of the bill. Levi Bolton, the executive director of the Arizona Police Association, and Ken Crane, president of the Phoenix Law Enforcement Association, both supported the bill as well.

SB 1142 would have held protest organizers liable for any damage that occurred if a protest got violent — even if that damage was the work of an opposing group, and even if the event organizers had nothing to do with the damage.

Rioting is already illegal, but the bill sought to add it to the list of offenses covered by the state’s Racketeer Influenced and Corrupt Organization laws.
That would have given prosecutors the ability to seize protester organizers’ property — putting liens on their homes, for instance.

When the bill passed the Senate last week, it sparked a national outrage, with many questioning whether or not it was even constitutional.

But Mesnard says that was not what made him kill the bill, but it certainly had an impact on bringing the bill out of the shadows so it could not creep by without being noticed until it was too late.

“I was less concerned about the national story,” he says. “My decision was based on what I think is best for Arizona and the concerns that were being expressed by Arizonans.”

“I’m certain the sponsor wasn’t trying to infringe on anyone’s First Amendment rights,” he adds. “I want to stand up for him a little bit – he’s being criticized, and I don’t know if that’s entirely fair.”

The news that the bill won’t have a hearing in the House is already being celebrated by Democrats and civil liberties groups.

“Thanks to everyone who spoke out against this terrible proposal!” the ACLU of Arizona wrote on Twitter. “Continue fighting for our civil liberties!”

Added the Arizona Democratic Party: “One bit of rational news. Now we’re back to fighting other bad bills.”

National outrage has made a positive impact against this unconstitutional and unethical bill. We have worked together to protect our rights against an oppressive force that sought to take away the rights and property of anyone that opposed them.

Black Man Gets 7 Years in Prison Even Though Jury Finds Him ‘NOT Guilty’...