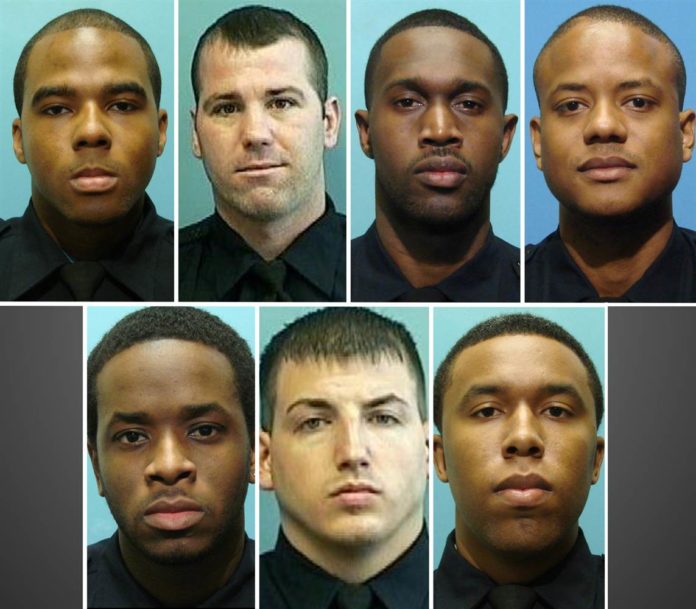 One of the officers is also facing a charge for drug distribution.

NBC News reported that investigators said the crimes — some of them committed by some members of the elite Gun Trace Task Force — took place last year as the Department of Justice investigated the Baltimore Police Department for use of excessive force, among other violations. The racketeering investigation was conducted in secret over the past year as part of what officials described as a sweeping reform effort across the department.

“They were involved in stopping people who had not committed crimes and not only seizing their money but pocketing it,” he said. “These are really simply robberies by people who are wearing police uniforms.”

Baltimore City Police Commissioner Kevin Davis said the indictments were “a punch in the gut” for the Baltimore Police Department. “These officers are 1930s-style gangsters as far as I’m concerned,” he said.

Davis is pushing for reform across the police department due to their regular use of excessive force.

Last August, in the wake of the tumult following Freddie Gray’s death, the Justice Department issued a report that said the Baltimore police department often used excessive force and conducted unlawful traffic stops in some of the city’s poorest and predominantly black communities. As part of an agreement with the DOJ, the Baltimore police department agreed to a consent decree to install sweeping reforms, said NBC

“We wouldn’t be under a consent decree if we didn’t’ have issues. We have issues,” Davis said.

Posters detailing specific allegations from 2016 sat on either side of the podium during the press conference.

NBC continued their report and listed some of the crimes the indicted officers were accused of.

Prosecutors said one officer helped a friend being tracked as part of a drug conspiracy remove a GPS tracking device placed by the Drug Enforcement Agency on the person’s car.

In another case, the officers watched a drug home for a full day and then stole $3,000 from people who later emerged from the home.

In yet another instance, an officer charged overtime while at a casino when the sergeant in charge was on vacation, the Maryland U.S. attorney’s office said. Another officer claimed overtime while vacationing in Myrtle Beach, South Carolina.

Sometimes, the officers turned off their body cameras to avoid recording what they were up to, according to the indictment.

As first reported by the Baltimore Sun, several of the officers were also highly praised in the October 2016 Baltimore Police newsletter in an article written by Lt. Chris O’Ree, a member of the ATF taskforce.

“I am extremely proud to showcase the work of Sergeant Wayne Jenkins and the Gun Trace Task Force,” O’Ree wrote. “Sergeant Jenkins and his team have 110 arrests for handgun violations and seized 132 illegal handguns.” He added, “I couldn’t be more proud of the strong work of this team.”

Rosenstein said that the investigation involved electronic surveillance and the installation of a recording device in the cars of one of the officers. He said that the recordings demonstrate “a lack of respect for the system, particularly in discussions about overtime.”

One of the accused officers reportedly said that working for the police department is “easy money.”

“I can assure you that for the officers that are doing their legitimate jobs, this is not easy money by any means,” Rosenstein said.

The president of the Baltimore City Fraternal Order of Police, Gene Ryan, found the situation very disturbing and wants to be sure the officers get a fair trial.

“We are very disturbed over the charges filed against our members by the U.S. Attorney today,” Ryan said in a statement. “These officers are entitled to due process and a fair trial in accordance with the Constitution and the laws of our state.”

Hopefully getting rid of these 7 corrupt officers will help create a better, more honest Baltimore PD that can be trusted by the people.

Baltimore Police Van Driver Not Guilty of All 21 Administrative Charges in Freddie Gray...