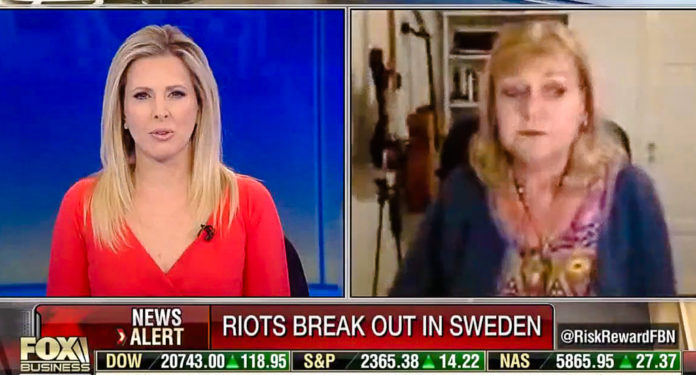 Fox Business used a neo-Nazi collaborator to gain support for President Donald Trump’s suggestion that Sweden was experiencing an increase in violence due to Muslim immigrants.

Expo reported that on Feb. 21, Fox Business host Cheryl Casone asked “Swedish columnist Ingrid Carlqvist” to push back on the president’s critics without mentioning her guest’s right-wing extremist views or ties to the Swedish neo-Nazi movement.

“What the viewers are never told is that Ingrid Carlqvist has been a central player in the anti-Muslim counter-jihad movement.” Nor are the viewers made aware that she recently accused ‘representatives of the ethnic group of Jews’ in Sweden of being behind Sweden’s cultural diversity, a conspiracy theory that Swedish nazis have long promoted.”

The report continues with some of the disturbing prejudice shown by the Fox guest:

Carlqvist is known for her hard-line anti-Muslim views. In December 2016, on a podcast run by members of the violent nazi organization “Nordic Resistance Movement”, she declared that she wants to drive out all Swedish Muslims from the country. (Radio Regeringen #28, 21 December 2016.)

In recent years, Ingrid Carlqvist has moved closer to the openly racist, white supremacist milieu in Sweden. She recently declared her willingness to collaborate with the Nordic Resistance Movement, a militant nazi group.

Last year she was one of the speakers at Stockholm’s annual fascist conference “Identitarian Ideas”. She also attended this year’s conference, where a new alliance between the organizers and the American Alt-Right movement and Richard Spencer of the National Policy Institute was announced. Spencer gained international notoriety after giving a speech in praise of Donald Trump in which he yelled “Hail Trump!”, while large sections of the audience stretched out their right arms in a Hitler salute

“Jews in the vanguard of Sweden’s cruel transformation”
In February, during a presentation of her new book at a seminar in Gothenburg, she stated that the big problem wasn’t just Muslims. It was also Jews.

“It pains me, believe me, to have to state this. But those who have been the vanguard of Sweden’s cruel transformation into Absurdistan are Jews. In my naïvity, I have viewed Swedish Jews as entirely sympathetic to the fatherland. Presumably the majority is, but those who stubbornly and purposefully, in the 60s, claimed that Sweden was awful and had to change, were above all Jews.”

Why would Fox Feel the need to pass off another prejudice person as an expert? Will Trump call them out on their fake news?

Coroner: Keeven Robinson Was Strangled To Death By Louisiana Police