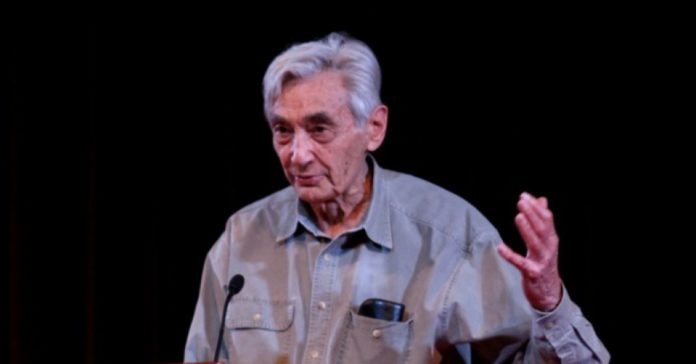 A Republican Arkansas lawmaker has introduced legislation to ban the works of the late historian, activist, and writer Howard Zinn from publicly funded schools.

The bill from Rep. Kim Hendren, just noted by the Arkansas Times, was introduced on Thursday and referred to the House Committee on Education.

It states (pdf) that any “public school district or an open-enrollment public charter school shall not include in its curriculum or course materials for a class or program of study any book or other material” authored by Zinn from 1959 until 2010, the year in which he died.

The Zinn Education Project, which aims to “to introduce students to a more accurate, complex, and engaging understanding of United States history than is found in traditional textbooks and curricula,” noted Thursday that educators in the state may have a very different take from Hendren: “To date, there are more than 250 teachers in Arkansas who have signed up to access people’s history lessons from the Zinn Education Project website.”

Fight censorship with people’s history and critical thinking in the classroom. With your donation, we’ll send copies of [Zinn’s] A People’s History of the United States and people’s history lessons to Arkansas teachers.

Publisher Haymarket Books tweeted in response to the news that people should read more of Zinn’s works.

It’s not first time in recent history the works of the legendary Zinn have been the target of suppression.

US Signs $12 Billion Arms Deal With Qatar Days After Saying It Funds Terrorism...

Black Troops Far More Likely To Be Punished By Commanders And Courts – Anti...

DEA Just Admitted It Lets Drugs Into Communities & Pushes Them On Citizens –...