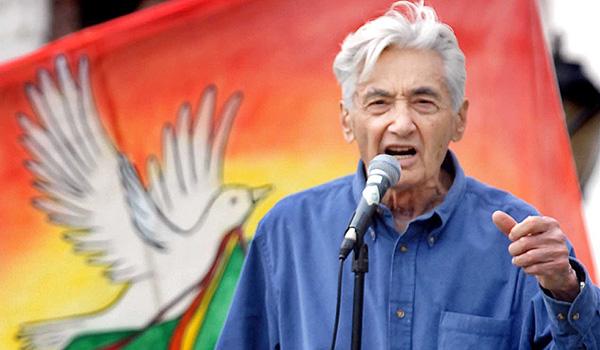 This Arkansas Republican has really shown his opposition to actual history, especially when it comes to the abuse of minorities.

Republican Arkansas state Sen. Kim Hendren introduced a bill to the state legislature that will ban the works of historian Howard Zinn from all schools that receive any public funds.

The Arkansas Times reported that House Bill 1834 would ban all public schools and open enrollment charter schools from “including in its curriculum or course materials for a program of study books or any other material authored by or concerning Howard Zinn.”

Zinn, who died in 2010, was a Ph.D. historian, social activist and more who wrote the best-selling “A People’s History of the United States.” A version for young readers came out in 2007. The book is a groundbreaking re-examination of U.S. history in terms of its effects on the poor, people of color and women.

Conservatives argue that Zinn’s information looks at U.S. history through the lenses of race and class, placing too much emphasis on slavery and Native American genocide and not enough on American exceptionalism and the wonders of capitalism.

Zinn didn’t mind the criticism, saying, “If you look at history from the perspective of the slaughtered and mutilated, it’s a different story.”

Proudly, unabashedly radical, with a mop of white hair and bushy eyebrows and an impish smile, Mr. Zinn, who retired from the history faculty at Boston University two decades ago, delighted in debating ideological foes, not the least his own college president, and in lancing what he considered platitudes, not the least that American history was a heroic march toward democracy.

Almost an oddity at first, with a printing of just 4,000 in 1980, “A People’s History of the United States” has sold nearly two million copies. To describe it as a revisionist account is to risk understatement. A conventional historical account held no allure; he concentrated on what he saw as the genocidal depredations of Christopher Columbus, the blood lust of Theodore Roosevelt and the racial failings of Abraham Lincoln. He also shined an insistent light on the revolutionary struggles of impoverished farmers, feminists, laborers and resisters of slavery and war.

Such stories are more often recounted in textbooks today; they were not at the time.

“Our nation had gone through an awful lot — the Vietnam War, civil rights, Watergate — yet the textbooks offered the same fundamental nationalist glorification of country,” Mr. Zinn recalled in a recent interview with The New York Times. “I got the sense that people were hungry for a different, more honest take.”

Is Arkansas at the point where they need to censor actual history from their schools? If this passes, it could set the standard for removing important history from school curriculum. As George Santayana said, “Those who cannot remember the past are condemned to repeat it.”  Do Arkansas Republicans want to repeat the genocide and atrocities Zinn wrote about?

Russia Has the Ability to Blackmail Trump Based on “Perverted Sexual Acts” in Moscow...