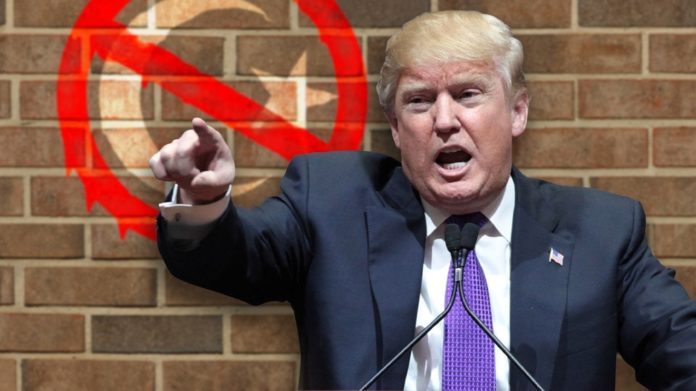 The Trump administration threatens to roll out version 2.0 of the Muslim ban very soon. It was delayed earlier this week, because Trump advisers reportedly thought it could step on the good press he’d earned from his speech, thus inadvertently undercutting their own claims that enacting the ban is an urgent national security matter.

The Washington Post reported the real reason for the delay: The Trump administration can’t solve the problem that has always bedeviled this policy, which is that there isn’t any credible national security rationale for it. Unlike on the campaign trail, when you’re governing, you on actually have to have justification for what you’re proposing, or you often run into trouble.

MSNBC’s Rachel Maddow had an important scoop on Thursday night that further undercuts the substantive case for Trump’s ban, which would restrict entry into the country by refugees and migrants from select Muslim-majority countries. Maddow obtained a new internal Department of Homeland Security document that reached this key judgment:

We assess that most foreign-born, US-based violent extremists likely radicalized several years after their entry to the United States, limiting the ability of screening and vetting officials to prevent their entry because of national security concerns.

The DHS also recently leaked a separate document that stood in opposition to the Muslim ban.

This new document is separate from another DHS document that was leaked to the press last week. That one also undercut the case for the ban, concluding that “country of citizenship is unlikely to be a reliable indicator of potential terrorist activity.”

The new document seems to suggest that the majority of “radicalized” people become that way after they enter the U.S., likely because of the way they are treated after arriving here.  So alienating Muslims, as Trump has done and continues to do, and giving Trump supporting hate groups (such as the KKK and other white supremacist groups) free passes to terrorize minorities would only encourage more terrorists to pop up.

The new document obtained by Maddow weakens the central rationale for the ban, which is to put a temporary delay on entry into the United States for the express purpose of tightening up our vetting procedures. DHS’s conclusion appears to be that vetting procedures in particular are not that useful in screening out people who radicalize later, and that most foreign-born emigrants to the United States who become violent extremists fall into that category.

“The national security justification for this whole ban — this setting up of extreme vetting — is bull-pucky,” Maddow said. “There’s nothing they can set up at the border to tell you years down the road who might become … a radical and violent person years from now.”

This complements the conclusion of the other leaked memo. They appear to mean that DHS’s analysts believe that singling out those countries makes little sense and points to a problem of figuring out why they become radicalized after they arrive.

Now, an important caveat is necessary here — one that sheds more light on the Trump administration’s actual rationale for the ban, which is crying out for more debate. The ban’s main architects — Stephen K. Bannon and Stephen Miller — would probably argue that these new documents don’t undercut their larger arguments for it.

As the Post has reported, the evidence is mounting that Bannon and Miller view the ban as part of a much broader, long-term demographic-reshaping project. Miller let slip in a recent interview that the ban isn’t just about national security, but also about protecting U.S. workers from foreign competition. And the Los Angeles Times reports that Bannon and Miller have privately argued that the ban is in keeping with the need to combat immigration by people who “will not assimilate”:

Inside the West Wing, the two men have pushed an ominous view of refugee and immigration flows, telling other policymakers that if large numbers of Muslims are allowed to enter the U.S., parts of American cities will begin to replicate marginalized immigrant neighborhoods in France, Germany and Belgium that have been home to plotters of terrorist attacks in recent years, according to a White House aide familiar with the discussions.

Thus, the ban is of a piece with the long-term goals of protecting American workers from economic competition and preventing European-style immigrant communities (which incubate terror plotters) from developing here. Bannon and Miller could argue that these arguments are partly about national security, too. But this is a case that centers on long-term demographics. That does not support the administration’s case for the immediate ban, since DHS has concluded that “extreme vetting” can’t screen out the threat of radicalization later. If anything, those larger motives undermine the case for the ban, by throwing its stated short-term motive into doubt.

The Trump administration needs to stop the ban and stop their irrational hatred.  Based on what the DHS says, the ban will be ineffective in stopping extremists from entering the country. It is also likely the ban will actually encourage even more terrorism from Trump supporting white supremacist groups while creating people to combat them since Trump does to seem to be concerned with white terrorists.

“The Devil’s Breath” – World’s Scariest Drug Can Block Free Will, Wipe Your Memory,...