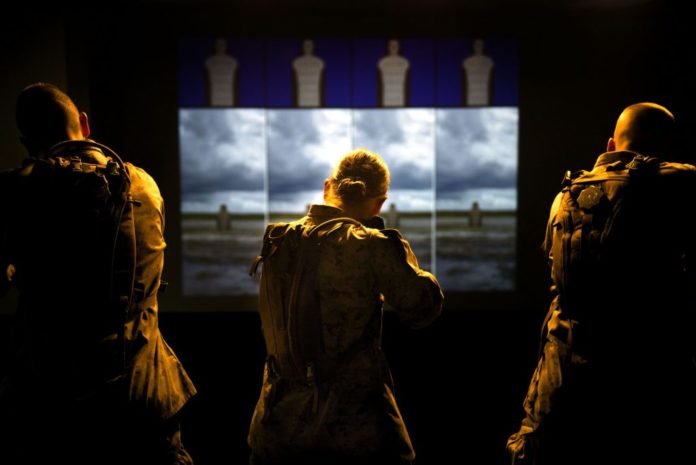 The Marines are amongst the oldest and most respected institutions in the nation. But behind the bold and brass lies a dark seedy underbelly who’s roots are deeply engrained with sexism and misogyny. Ask any woman in a male dominant field- women must work three times harder to prove herself equal to her male counterparts and women are still not making dollar for dollar what the males in their field are earning. This is perhaps why even in the nation’s most respected institutions women are still seen as sexual commodities to be consumed rather than valuable contributors in the work place.

This week it was revealed that nude photos of female marines were being circulated on a Facebook group of active duty and retired members of the United States Marine Corps. When the whistle was blown by a fellow Marine, criticism fell to the one who exposed the group more so than the one committing the violations.

Active duty and retired members of the United States Marine Corps are being investigated for sharing nude photos of women—many of them fellow Marines—on a secret Facebook page. Some of these photographs were purportedly taken without the knowledge and consent of the subject.

According to the AP, the Defense Department has begun an investigation into a secret Facebook group entitled “Marines United” where male active duty and retired Marines, as well as Navy Corpsman and British Royal Marines convened to swap nude photos of women. Photos of unaffiliated women were circulated together with pictures of female Marines and veterans. Additional photos were shared via a Google Drive link which had a following of roughly 30,000.

The photographs have been removed and, at the request of the Marines, those social media accounts involved in file sharing were deleted by both Facebook and Google.

Marines Corps commandant Gen. Robert B. Neller has not directly addressed this scandal in his comments to the media, but did release a statement vaguely referencing it: “For anyone to target one of our Marines, online or otherwise, in an inappropriate manner, is distasteful and shows an absence of respect.”

Sgt. Maj. Ronald L. Green, the top enlisted member of the Marine Corps, was more direct. “These negative behaviors are absolutely contrary to what we represent,” he told the AP.

News of the secret Facebook group was reported by Marine veteran Thomas Brennan, who helms the nonprofit news organization The War Horse.

“We are thankful that Thomas Brennan, a Marine veteran, notified the Marine Corps and NCIS about what he witnessed on the ‘Marines United’ page,” said Capt. Ryan E. Alvis, Marine Corps spokesperson. “It allowed us to take immediate action to have the explicit photos taken down and to prepare to support potential victims.”

Yet Brennan has come under fire for exposing the group. According to the Marine Corps Times, members of “Marines United” have threatened both Brennan and his family. It was even suggested that he be waterboarded.

Brennan tells the Marine Corps Times that there’s a “bounty on pictures of my daughter…It has been suggested that my wife should be raped as a result of this, and people are openly suggesting that I should be killed…Can you imagine being one of the victims?”

Brennan showed an immense amount of courage in exposing his fellow Marines, and the backlash he and his family have received should not be how doing the right thing should be received. If this is how someone who exposes the wrongs of the military is dealt with- imagine what is going on behind closed doors and covered up, in fear of facing the same consequences and Brennan.

The Facebook group was littered with “obscene” comments about the women whose photos appeared there. And Brennan’s report indicates that some of the photos may have been obtained through stalking.

Those found guilty of posting explicit pictures could be charged as violators of the Uniform Code of Military Justice. Other participants—those who condoned the behavior—could also be criminally charged.

Senior Marine Corps officials are reviewing a document that briefs them on “Marines United” and outlines the course of action to follow in the wake of this horrifying report. You can read it here.

What would you do if you were in Brennan’s shoes? What do you think the consequences should be for those that violated the privacy of their fellow marines? Join the discussion below.