Home Crime Second White Supremacist “Get out of my country” Shooting in Less Than... 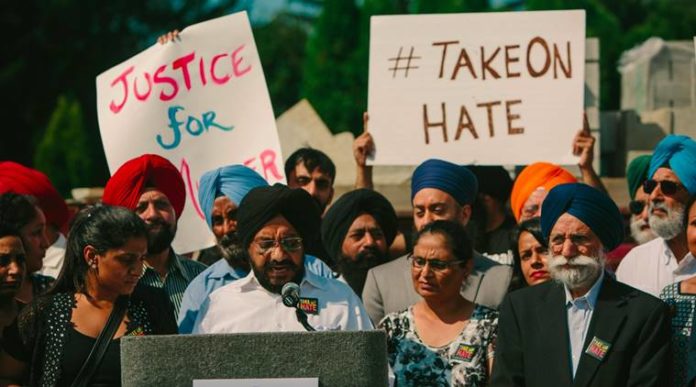 In a horrific incident that echoed a race-related murder that we reported on occurred mere weeks ago- another Indian-American man has been shot in an apparent hate crime after an altercation found the 39-year-old Sikh man shot in the arm after an unidentified gunman shouted: “Get out of my country!” The victim was in the driveway of his own home working on his car when the gunman simply walked up to him and picked a fight, according to police in Kent, Washington.

As reported by Elizabeth Elizalde for Daily News:

The FBI is investigating the shooting of a 39-year-old Sikh man as a possible hate crime after a gunman allegedly yelled “go back to your own country” before firing at him near Seattle, officials said Sunday.

“This is a top priority investigation, and we are doing everything possible to identify and arrest the suspect,” Kent Police Chief Ken Thomas said.

The attack reverberated across the nation, with Mayor de Blasio condemning it from New York.

“As mayor of the city with the nation’s largest Indian community, my message is clear: this is your city and this is your country,” de Blasio tweeted.

India’s foreign minister, Sushma Swaraj, identified the victim as Deep Rai – a U.S. citizen from India – in a tweet Saturday.

Swaraj noted she spoke with Rai’s father who said his son was shot in the arm and “is out of danger” while “recovering in a private hospital.”

Rai told authorities a man donning a mask approached him Friday night outside his Kent, Wash., home and the two engaged in an argument, with the suspect telling him to go back to his country.

The suspect then fired at Rai and fled the scene, police said.

Though Rai is out of danger in the physical sense. The Sikh community has expressed concern for their safety in the future. As the anti-immigrant sentiment in the nation rises, communities such as that of the Sikhs and Muslims are feeling the brunt end of it.

The shooting also created fear within the Sikh community with its members calling on law enforcement to investigate the racially motivated attack.

This person was so cowardly as to attack someone based on his irrational bigotry that he had to be masked. People with real convictions need not shield their true selves when they express their beliefs.

“Everybody who is part of this community needs to be vigilant,” said Satwinder Kaur, a Sikh community leader in Washington state. “It is scary. The community has been shaken up.”

Purinton was charged with premeditated murder and two counts of attempted murder.

Authorities are investigating the attack as a hate crime after witnesses said he was drinking hard and started yelling racial slurs including “get out of my country.”

As hate crimes are on the rise in the nation- where is President Trump on this? He stays silent while entire communities live in fear- but instead, he instructs White America that these are the very communities TO be feared. It seems apparent that the immigrant demographic of America is to be fearful of White America, not the other way around.

Do You Trust Snopes? You Won’t After Reading This. – Anti Media News

California Man Arrested, Charged With Driving Under The Influence — Of Caffeine – Anti...