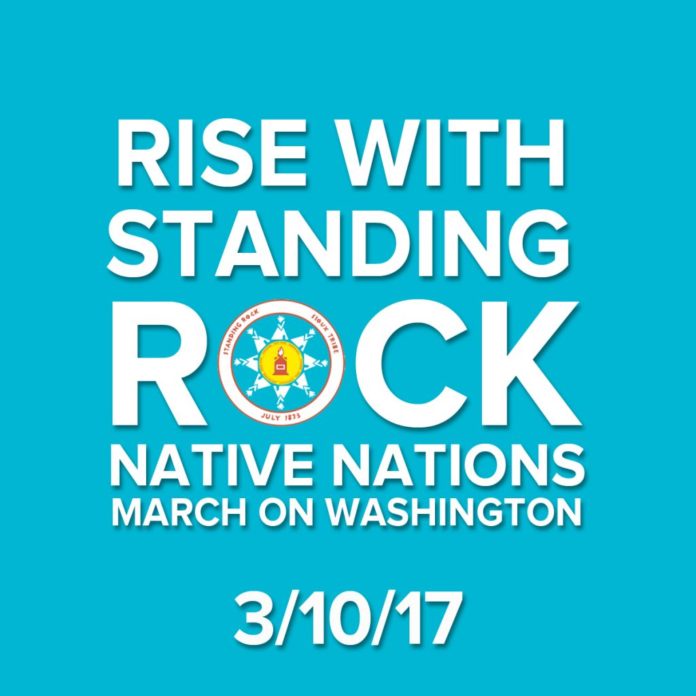 After being kicked off their own land by law enforcement that is protecting oil company profits instead of people, the Standing Rock Sioux are on the trail to Washington. It would be amazing to have enough attendees to dwarf the crowd from Trump’s inauguration.

Members of indigenous nations from across the country began to arrive in Washington Tuesday for four days of protests, prayer and demonstrations to fight for their rights and raise awareness of issues affecting Native Americans, reported The Washington Post.

The Native Nations Rise movement will bring a teepee encampment along with speakers and cultural workshops to the National Mall next to the Washington Monument. An interfaith service is planned for Thursday at the National Cathedral, and the week’s events will culminate Friday morning with a march on the White House and rally in Lafayette Square.

The 1,172-mile pipeline crosses sacred burial grounds and threatens the water supply for over 10 million people. The oil company desecrated sacred grounds for the tribe, then attacked protesters with vicious dogs when the group tried to protect their burial sites. The police also arrested reporters that released video of the incident.

In December, President Barack Obama temporarily halted the $3.8 billion project after thousands of veterans showed up to protect the protesters from the months of police brutality they had endured. But President Trump, who had personal investments in the company behind the pipeline, greenlighted its completion with an executive order soon after taking office in January. The legal requirements of an environmental impact study and tribe consultation were never met, so Trump’s executive order did contradict the current laws and violate the 1851 treaty with the Sioux Nation.

While construction on the final phase of the pipeline continues, tribes remain hopeful they can stop it in court. On Tuesday, a federal judge denied a preliminary injunction request by the Cheyenne River Sioux Tribe to halt construction on religious grounds. Now the Cheyenne River Sioux and the Standing Rock Sioux tribes will wait for a judge’s decision on a lawsuit the tribes filed jointly. That ruling is expected in April.

While they await that decision, they plan to make their case on America’s front lawn. Last week, Standing Rock Sioux chairman David Archambault II called on other “Native relatives and allies” to join the protest.

“We must march against injustice,” he said in a statement. “Native nations cannot continue to be pushed aside to benefit corporate interests and government whim.”

If you still Stand with Standing Rock, then please show your support by going to the protests if you are able, and share this article so others will know. Let’s make this huge! This is a fight for everyone’s rights, not just Native rights.

‘Go home, you are not wanted’: VA Governor Slams White Supremacists And Nazis for...