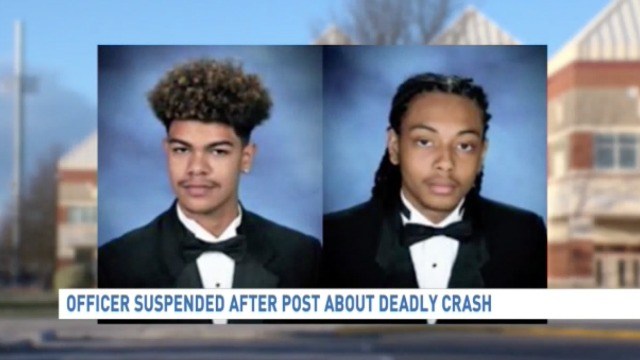 If there wasn’t enough evidence that Black lives do not matter in the eyes of many of those in law enforcement- the following story is a prime example of how callous and indifferent police can be when it comes to matters concerning Black Americans. According to officials in Charles County Maryland, just hours after two teens were killed in a crash in Waldorf-on Friday police officer Rob Glover wrote, “F*^% em, shouldn’t have been driving that fast” on his Facebook page, just hours after the fatal incident.

The crash, which involved three Westlake High School students, was fatal for 17-year-old Colin Bipat and Desmond Cooke, who both died at the scene, while 18-year-old Caleb F. Marshall was seriously injured.

“It is a very tragic scene,” Charles County Sheriff’s Department Major Chris Becker told ABC7 News. “It appears they were unable to stop for traffic that was at the red light, tried to avoid having an accident and subsequently struck the utility pole. I’m an auto traffic investigator. In my career, I have not seen many as severe as this.”

Charles County Sheriff Troy Berry said that, because of Glover’s Facebook post, Glover has been suspended with pay while the department considers further administrative actions.

As the community mourns the loss of two young men, someone meant to serve and protect these young men balks at their deaths. Anyone outside looking in can see that this is unacceptable, and at the very least, in this case- the County’s sheriff is taking a stand in reprimanding the offending officer. If this officer was so brazen to speak on the loss of Black lives so callously yet, so openly. Imagine what goes on behind closed doors.

“As your Sheriff, I would like to express my sincerest apology to the citizens of Charles County, and especially to the families who are now grieving the loss of their loved ones. The comment that was made by one individual does not reflect the opinions of myself nor the Charles County Sheriff’s Office. All of us here take this incident very seriously. This morning, I called the employee into my office and personally dealt with him in reference to his comment. The employee has been suspended pending further administrative actions,” the sheriff said in a statement.

Do you think officers should be reprimanded for the views they share on their Facebook profiles? Do you think the sentiments of this officer is that of many others? Join the discussion in the comments section below.

Video Emerges Of US Allowing ISIS Fighters To Escape Safely in Syria – Anti...