Most people are beginning to understand that approximately 90% of the food in our grocery stores has either been intentionally sprayed with Monsanto’s weedkiller or has been inescapably contaminated with the toxin.

Groundbreaking research is being conducted all over the world showing how insidious the weedkiller’s presence is in our lives. There is truly no escaping Monsanto’s glyphosate as the carcinogenic chemical has been found in air and rain samples, umbilical cord blood, baby formula, prenatal vitamins, vaccines, breast milk, and water supplies.

We understand what makes Roundup so toxic is its key ingredient glyphosate. But what makes glyphosate so toxic? Given the fact that glyphosate has been discovered to be an ingredient in five different childhood vaccines, meaning children ARE being injected with Roundup, let’s explore glyphosate’s toxicity.

How To Make Glyphosate

As you might guess, glyphosate is not a naturally-occurring chemical in the environment. According to Ullman’s Encyclopedia of Industrial Chemistry (7th edition), three ingredients are needed to produce glyphosate–glycine, formaldehyde, and phosphorous acid. These ingredients are fused together using heat. 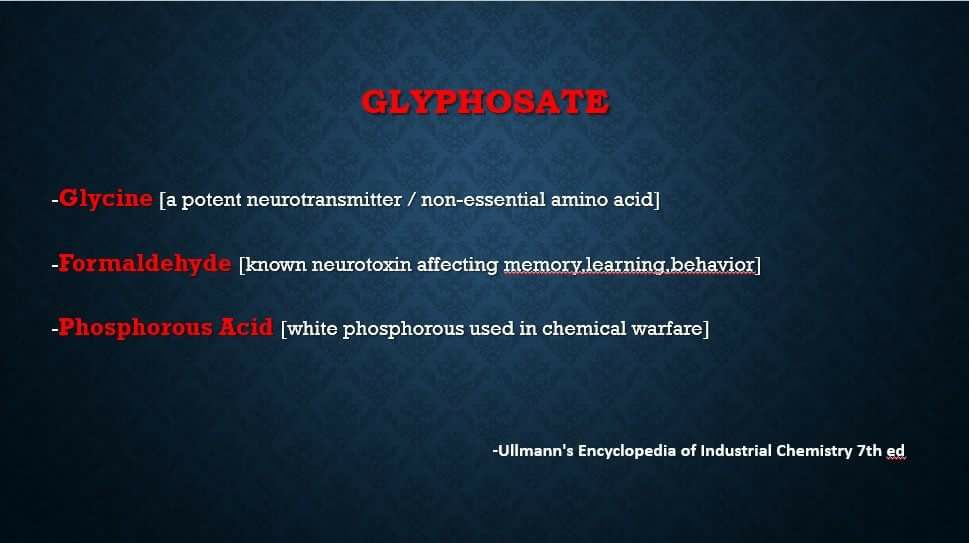 Why should we be concerned about the ingredients used to manufacture glyphosate?

Glycine is one of 20 amino acids used to make protein in the human body, however it is not considered an essential amino acid because the body can produce it naturally from other chemicals. Glycine is a potent neurotransmitter as well as a “superfuel” for cancer.

But what about injecting glycine?
Let’s start with the mild symptoms:

-mild diarrhea
-upset stomach
-nausea
-a feeling of pain and a warm sensation at the site of the injection
-a feeling, or a sense, of being swollen over the entire body
-headache
-joint pain

Now for the “uncommon” side effects:

And the dangerous, but “rare” side effects:

Has your doctor ever warned you of glycine side effects or the fact that there are many types of people who should avoid injecting glycine? If you are pregnant, lactating, or have one of the following conditions, you should not be injecting glycine into your body:

Because zero studies exist that prove formaldehyde is safe to inject into the human body, we will examine the CDC’s fact sheet on exposure. According to the CDC:

Here are some side effects of formaldehyde exposure according to the CDC(source):

In 2011, the Department of Health and Human Services (HHS) determined that formaldehyde is a known human carcinogen based on substantial human and animal inhalation studies, including numerous studies that show a troubling link between formaldehyde and leukemia.

Glyphosate production starts with iminodiacetic acid, phosphorous trichloride and formaldehyde, then glycine and dimethyl phosphate are added. Phosphorus trichloride is prepared industrially by the reaction of chlorine with a refluxing solution of white phosphorus. [Ullmann’s Encyclopedia of Industrial Chemistry, 7th edition]

Very little information exists on the safety of phosphorus acid in general, not to mention its safety as an injectable for humans, but there is this study that showed mortality in fish and also this New Jersey Department of Health and Senior Services Hazardous Substance Fact Sheet, which states:

Phosphorus is so poisonous and so reactive, it is commercially stored underwater. Phosphorus exists in a number of forms [white, red, black and/or violet] in the same physical state. Phosphorous acid is used in the manufacture of herbicidal glyphosates.

White phosphorus is used as a deoxidizing agent in the preparation of steel and phosphor bronze. It is also used in rat poisons and to make smoke screens (by burning) for warfare. White phosphorus and phosphorous acid only have slight chemical differences, but both utilize very similar techniques in regards to their production.

We should all be more than a bit concerned that phosphorous acid is being injected into our children by way of glyphosate contamination, especially given that there is ZERO research to prove its safety.

To sum up the dangers, note that white phosphorous, a horrific chemical weapon of war that has been used in Gaza, Syria, El Salvador, Lebanon and Iraq, is actually an ingredient in vaccines that you inject.

What would Monsanto do without phosphorous acid?? Not only do they use it to formulate the active ingredient (glyphosate) in their best-selling weedkiller Roundup, they are the sole producers of the world’s supply of white phosphorous, which is dropped on countless innocent civilians with reckless disregard. (At least that’s what these redacted Army files allege.)

Why Does This Matter?

In case it’s not clear, there is research proving that glyphosate has now contaminated at least five different childhood vaccines:

If such caution is exercised to avoid Monsanto’s weedkiller in the diets of our children, how is there any justification to allow it to be injected into their little bodies? For the record, there is not one single study that has ever been conducted on the safety of glyphosate as an injectable.

No Jail Time For Cop Who Impregnated 15-Year-Old Girl