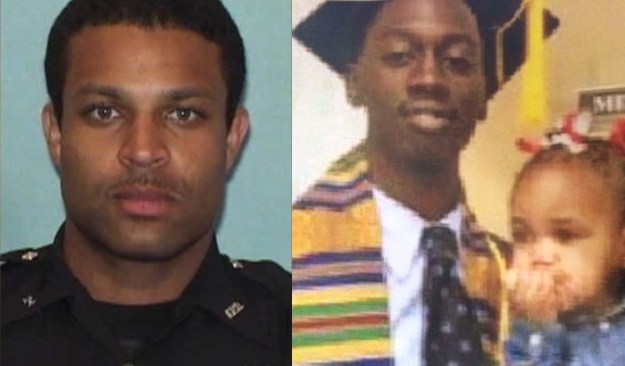 The Atlanta police officer responsible for the shooting death of Deaundre Phillips had received prior complaints “alleging that he used unnecessary force, but none of them led to any disciplinary action.” The 24-year-old Atlanta man was shot and killed while the parking lot of the Atlanta Public Safety Annex and as police accounts, Phillips attempted to being questioned by two plainclothes officers saying they smelled marijuana coming from the vehicle.

While Phillips’ family says he” was no angel”, they maintain that he would not be so careless as to smoking marijuana in front of a police annex, but even so- he did not deserve death for his alleged infraction. They believe that Deaundre was under the impression he was being carjacked and was trying to get away.

As previously reported on myAJC:

As Phillips drove away, one of the officers was halfway inside the vehicle, according to police. He responded with a fatal shot to Phillips’ neck.

There is no dispute that Phillips tried to flee, though his motives are unclear. Attorney Chris Stewart, representing Phillips’ kin, said he may have thought he was being carjacked, as the officers, who have not been identified, were out of uniform.

Stewart said surveillance video of the parking lot would help to provide clarity.

The GBI, which is handling the investigation, said it will not release the video at this time but might reconsider once witness interviews are complete.

“We don’t want to compromise that part of the investigation,” GBI spokeswoman Nelly Miles said.

Stewart also accused Atlanta police of muddying the waters by releasing information about Phillips, alleging the Douglas High School graduate was affiliated with the Rolling 60s Crips gang and had a lengthy criminal record.

“Police departments mess up,” Stewart said. “They need people to feel bad for the officer and not the victim. They need to make this person someone you can look down to, you can’t relate to. So they make him a gang member, a criminal.”

Atlanta police did not supply details about Phillips’ alleged gang involvement. Stewart said Phillips’ criminal record is confined to charges, including criminal trespass and obstruction of an officer, that date back six years, when he was in high school.

“My grandson was treated unfairly,” Phillips’ grandmother, Deborah Hall, told The Atlanta Journal-Constitution. “The person they portrayed him to be is not the person he was.”

Hall said she spoke to Phillips daily on the phone.

“Dre Dre was a family man. That was his heart,” Hall said, referring to Phillips’ 5-year-old daughter. “He was a good father, a good role model to his baby.”

Since Phillip’s shooting death it has been revealed that the officer who had killed him has had complaints about his misconduct on more than one occasion. If the police will choose to highlight the negative part’s of Phillips life, it is only fair that the same courtesy be given to his killer.

As The Grio provided in an update to the case:

Investigator Yasin Abdulahad, who shot and killed Deaundre Phillips outside an Atlanta police annex on Jan. 25, had received prior complaints alleging that he used unnecessary force, but none of them led to any disciplinary action.

The 11-year veteran is currently under investigation for the shooting of Phillips. Abdulahad reportedly fired into Phillips’ car after smelling marijuana in the vehicle, which Phillips then drove off in. Abdulahad had claimed that Phillips drove off while he was hanging out of the passenger door, but surveillance footage showed that the officer was entirely inside the car.

Abdulahad is also under investigation for an incident in which he allegedly beat a man outside a night club while he was moonlighting as a security guard. Anthony Walters was charged with resisting arrest, and Abdulahad claimed that his severe facial injuries were the result of having fallen after his arrest.

There were also two complaints during a two-week period of time in 2007. The first complaint yielded “insufficient evidence … that the employee committed the violation,” according to APD’s Office of Professional Standards. Abdulahad was exonerated in the second complaint. Police, however, have not released details for either of those complaint.

While the case it underway- officer’s Abdulahad’s previous history should be taken into consideration. Is it far fetched that the officer would be hot headed enough to kill a man he believed to be fleeing the scene? Do you think Phillips would still be alive if offer Abdulahad was reprimanded for previous complaints about his behavior? It is clear who the police are looking out for in this case, and sadly in the case of too many others- and it is certainly not the citizens they are paid to serve and protect, but the institution of law enforcement itself.

Below is video surveillance footage of the fatal incident as it unfolded that night:

US Senators Pushing For 20 Years In Prison For Citizens Who Support Boycotting Israel...

Black Woman Is Protesting The Removal Of Jefferson Davis Statue In New Orleans –...