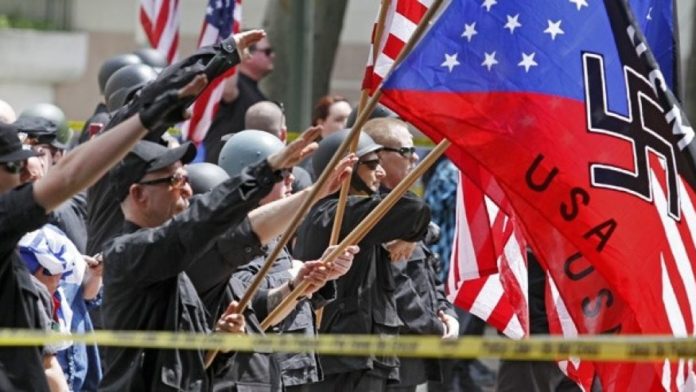 White supremacists are outraged after a couple was sentenced to 20 and 15 years in prison for displaying a Confederate flag and making armed “terroristic threats” to black people who were attending a child’s birthday party in Georgia in 2015.

The couple had a shotgun and “They repeatedly yelled death threats saying they were going to killing all the N—-. They said, ‘We’ll blow the heads off all the little b—— and the little n—– can get one too,’”

Erin Corbett of Raw Story reported white supremacist groups have responded to the sentencing online in Facebook posts and petitions in protest of the conviction, the Southern Poverty Law Center (SPLC) reports. James Oliver, a member of the country’s largest neo-Nazi organization, the National Socialist Movement (NSM), made a video over the weekend about the sentencing, though it appears to have been removed. The NSM is rooted in the original American Nazi Party.

According to SPLC’s report, Oliver argued in his video, “20 years for f*cking freedom of speech … for name calling … some high school, middle school, kindergarten bullsh*t.” Oliver was reportedly joined in the video by former Klansmen John Girton, who said, “Not one negro was harmed. However, one of them did get their feelings hurt by the use of the n-word.”

What ACTUALLY happened was these flaggers were INVITED to the party in a very fake act of goodwill in the spirit of interracial peace & harmony and such assorted bullshit, but when they arrived some “urban youth” outside began throwing beer bottles at their truck, causing them to swerve into the median which popped a tire on their truck, stranding them on the scene of what would have been another incident of black on white mob violence.

Girton also claimed that the defendants were attacked by “30 Negroes” and one of the defendants “got stuck there in front of a whole unruly mob of screaming Negros.”

Corbett reported white supremacists also threatened Douglas Circuit Judge William Beau McClain, and circulated a petition demanding that the conviction “be overturned or at least reduced dramatically.” A Facebook user named Branden Young commented on Girton’s post, writing, “Something needs [to be] done about judges like this.”

Other white nationalist groups that have spoken out in opposition to the sentencing include individuals associated with Keystone United, a racist skinhead group that says it is “dedicated to white supremacy and cleaning up white society;” Community First Outreach, a white supremacist non-profit; White Lives Matter, a neo-Nazi movement “dedicated to promotion of the white race” that was formed in response to Black Lives Matter.

Regardless of the popular belief among white supremacist and Nazi groups, this Georgia couple was sentenced appropriately for their terrorist actions.  They should be thankful the couple was not sent to a torture camp for being terrorists, which could have happened if they were Muslim.