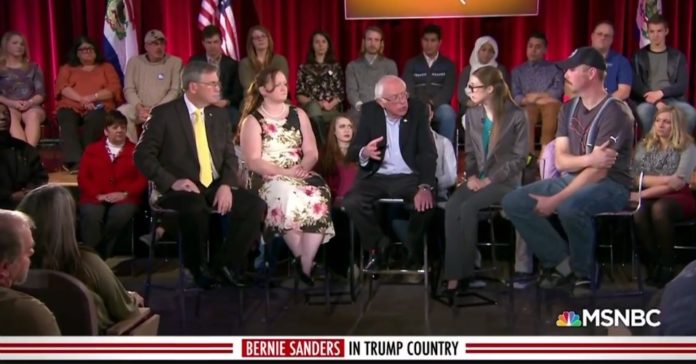 In a town hall in rural McDowell County, West Virginia, on Sunday, Sen. Bernie Sanders (I-Vt.) told a crowd filled with supporters of President Donald Trump that “healthcare is a right”—and was met with cheers.

The town hall was broadcast Monday on MSNBC‘s “All In With Chris Hayes,” and featured discussion on a range of topics: jobs, infrastructure, healthcare, and the opioid crisis, among others.

The warm reception to Sanders’ views—that climate change is real, that universal healthcare is a right, and that free higher education is necessary, among others—demonstrated that residents of this county that voted 75 percent for Trump support far more progressive policies than those touted by the president.

“We are the only country that doesn’t guarantee healthcare as a right,” Sanders told a coal miner who voted for Trump. “Do you believe that healthcare is a right?”

“Yes, I do,” the Trump supporter said, and the crowd cheered.

Earlier in that exchange, Sanders also appeared to find common ground on a topic widely seen as unpopular in coal country: climate change. Sanders explained that he believed in climate change—unlike the current administration—but he didn’t hold individual coal miners responsible for it, recalling that coal heated his “rent-controlled apartment in Brooklyn” when he was a child. “You guys are my heroes,” he said.

The senator then called for job creation in infrastructure and renewable energy, to put former coal miners back to work in well-paying jobs that will help mitigate the climate crisis. “We are the richest country in the world,” Sanders said. “We can do this.” The crowd applauded.

Sanders also advocated for retired miners—many of whom suffer from black lung disease and other ailments from a lifetime of mining coal—to receive the pensions and healthcare benefits currently tied up in Congress. He specifically called out Sen. Mitch McConnell (R-Ky.), who represents voters in coal country, for advocating for coal company executives over their workers.

One audience member—another retired miner—agreed with Sanders’ assessment, telling the senator that “I think it’s ironic that a senator from the Northeast takes care of my benefits better than someone like Mitch McConnell.”

“Throwing millions of people off of healthcare is not healthcare legislation,” Sanders said. “What it should be seen as is a huge tax break for the wealthiest people in this country.”

After the town hall, Sanders met one-on-one with West Virginians, some of whom made emotional appeals for help:

Must Watch: @BernieSanders talks one on one with to Paula Swearengin, resident of Beckley, WV #AllInWithBernie #FeelTheBernpic.twitter.com/KSm7MdX5MZ

As Hayes observed during the televised segment, the decline of coal has “decimated” the community, and many were also given a lifeline by the extension of Medicaid under Obamacare. During the presidential campaign, Trump promised the return of those coal jobs and also vowed to improve Americans’ healthcare coverage.

And so as the GOP aims to push millions off of healthcare and Trump aggressively deregulates industry, it remains to be seen how the Wall Street-friendly administration will ultimately be received by residents of depressed, rural areas such as McDowell County. Given the overwhelmingly positive reception to Sanders’ progressive stances at Sunday’s town hall, it looks as though Republicans—as well as West Virginia’s conservative Democratic senator Joe Manchin—may have something to worry about.

Attacker Screamed ‘I want to kill a Muslim’ While Chasing Passengers – Anti Media...

‘The Ocean Is Missing!’: Irma Literally Sucked All the Water Away From Coastline