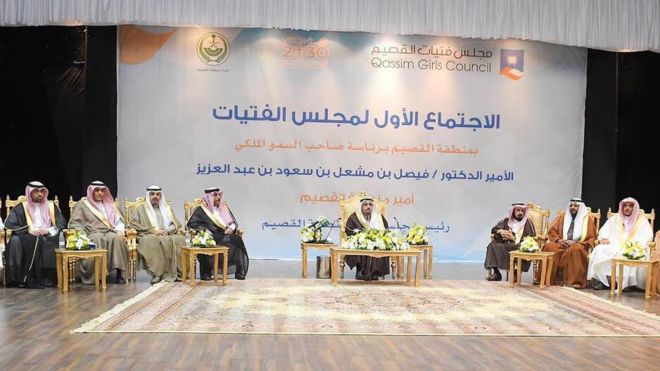 It seemed like a great idea, especially coming from a country known more for oppressing women rather than giving them a public platform, but when Saudi Arabia wanted to show off its inaugural girls’ council in al-Qassim province, they forgot to bring women.

The women were not allowed on stage, they had to sit in another room and be linked in via video.

The ridiculous image is being compared to another viral image, when US President Donald Trump, surrounded by men, signed an abortion policy in January.

Perhaps this is just a baby step in the right direction for the country.

The Saudi launch was led by Prince Faisal bin Mishal bin Saud, the province’s governor, who said he was proud of the conference and it was the first of its kind in the kingdom.

“In the Qassim region, we look at women as sisters to men, and we feel a responsibility to open up more and more opportunities that will serve the work of women and girls,” he said.

The girls’ council is chaired by Princess Abir bint Salman, his wife, who was also not pictured on stage.

Hopefully this will be a step towards actually empowering women  and giving them equal rights, but that is probably a long road for the country.

US Troops “Roll Into Poland” In Largest Deployment Since Cold War – Anti Media...

New York City Pays $1.5 Million To Woman After A Cop Knocked Out Her...