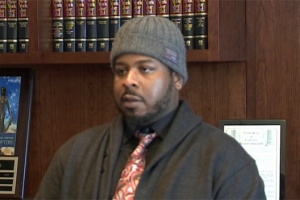 A vicious assault of a Black postal worker at the hands of vigilante police officers caught on surviellance video has been investigated and concluded with the officers walking away scot free.  One of the officers- Angelo Pampena had “allegedly filed a false affidavit claiming that the fight broke out” after the postal worker’s car was “found parked in front of a hydrant. The surveillance video shows he was parked legally, officials said.” Despite the cops clear perjury, no consequenes will been seen in this case. The true reason for the clash is believed to be an act of vigilantism on the officer’s part, as the postal worker- Karim Baker, had unwittingly given directions to the whereabouts of two police officers who were later murdered to their would-be killer.

As reported by NyDailyNews.com

A Queens judge on Thursday cleared a pair of cops accused of brutally beating a postal worker who unwittingly gave directions to a gunman who murdered two police officers.

The plainclothes officers, Angelo Pampena, 32, and Robert Carbone, 30, faced up to seven years in prison on charges that they violently assaulted postal worker Karim Baker on Oct. 21, 2015.

But Queens Supreme Court Justice Michael Aloise cleared the cops an hour after the attorneys gave their summations.

Their cases were sealed and dismissed.

Pampena and Carbone hugged their attorneys as people in the courtroom were stopped from clapping. The detectives were met with applause from supporters in the hallway outside the courtroom.

“We are gratified by the judge’s decision,” Pampena’s attorney, James Moschella, said. “These officers went out there in good faith and we feel the verdict is not only a vindication of their acts, but the brave actions of all New York City police officers day in and day out.”

“From the beginning, this appeared to be an overzealous prosecution not supported by the facts, so I appreciate the verdict,” Palladino said.

Prosecution was not overzealous. The facts were clear and supported by video evidence, even proving an officer commited perjury. The fact that law enforcement are celebrating this victory paints the clear picture that they are out to protect themselves, and not the taxpaying citizens who pay their salaries whom they are sworn to serve.

Baker has every right to feel unsafe. Having been the clear target of vigilante officers who have now gone unpunished- Baker must feel he has to live his life while constantly looking over his shoulder. If clear and concise evidence cannot protect ordinary citizens from the corruption of police, is it any wonder why Baker and many other people feel unsafe and are distrustful of cops? What are your thoughts on the case? Join the discussion in the comments section below.