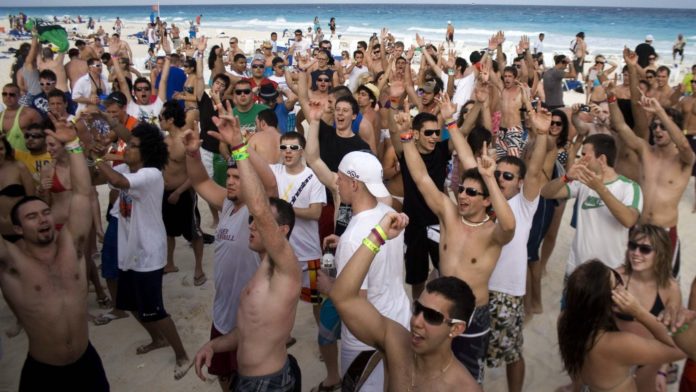 Its not enough for these bigots to be prejudice against Mexicans in the U.S., they went all the way to Mexico to chant a ridiculous Trump campaign slogan.

A group of American spring breakers went all the way to Mexico only to demand a physical barrier be built between the two nations—with them on the other side, reported SFGate.

The group of irony-immune coeds caused a scene during a Cancun cruise by chanting the now infamous campaign slogan that Trump used to muster votes from prejudice Americans.

According to the Yucatan Times newspaper, the incident happened aboard a “pirate ship” performance boat, which takes passengers out to sea for a pirate-themed show, replete with cannons and sword fights. The newspaper added that the “racist hymn” wasn’t an isolated incident and that numerous complaints about spring breakers have been lodged by Mexican tourist industry workers.

There, newlyweds Sully and Anaximandro Amable described “a flock of Americans” who began shouting “build that wall,” after the trip’s performance had ended. On Facebook, Amable wrote:

Today I was with Suly, my wife (who is a native of Mexico), watching an entertainment show off the coast of Cancun aboard a boat, and at the end of the show, a flock of Americans (maybe under the influence of alcohol, or maybe not), began to sing the infamous “Build that wall” chant louder and louder [translation via Yucatan Times]

Mexican passengers complained about the racist chanting, but the Americans refused to stop their xenophobic discrimination.

Man Who Murdered Mike Brown Admits Everything You Think You Know About His Death...