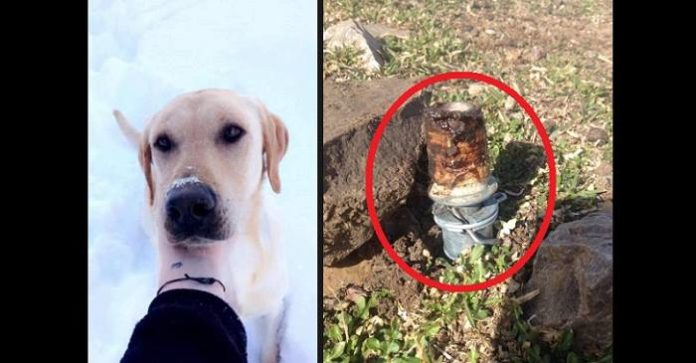 Apparently the USDA is allowed to plant deadly cyanide bombs on personal property and does not even have to tell them about it.

The family of a teenage boy sprayed by a cyanide explosive that killed their dog is outraged they weren’t told the device was planted near their home, the East Idaho News reports.

Canyon Mansfield, 14, went on a walk with his family’s 3-year-old yellow Labrador, Casey, on a hill behind their Pocatello home on Buck Skin Road.

“I see this little pipe that looked like a sprinkler sticking out of the ground,” Canyon told EastIdahoNews.com. “I go over and touch it. Then it makes a pop sound and it spews orange gas everywhere.”

The orange gas was cyanide, and it sprayed into Canyon’s left eye and on his clothing.

He quickly grabbed some snow to wash his eye but soon realized Casey was having problems.

“I look over and see him having a seizure,” Canyon said, holding back tears. “I ran over and he had these glassy eyes. He couldn’t see me, and he had this red stuff coming out of his mouth.”

Canyon ran home to get his mother.

“He said, ‘Mom, Mom, there’s something wrong with Casey,’” Theresa Mansfield recalled. “We ran back outside and up the hill and by the time we got there, Casey had died.”

Theresa called the police and then contacted her husband, Mark, who is a medical doctor.

“I hurried home, and the first thing I did was try to resuscitate the dog,” Mark Mansfield said. “Unfortunately I exposed myself to cyanide and had no idea.”

Canyon was rushed to Portneuf Medical Center for treatment and his family said they and Bannock County sheriff deputies who responded to their home had blood drawn to make sure they were OK.

With help from multiple agencies, they discovered Casey had died from exposure to an M-44.

Fox 6 reported M-44s are spring-activated devices that release cyanide when they are activated through upward pressure or pulling. The US Department of Agriculture uses the devices to control coyotes and other predators.

The Mansfields have lived in their home nearly 10 years and have never seen M-44s near their home.

“We weren’t aware, and nobody told us,” Theresa said. “There was nothing posted up on the hill saying to beware or be careful.”

The US Department of Agriculture Wildlife Services told EastIdahoNews.com this is the first unintentional discharge of an M-44 in Idaho since 2014.

“Wildlife Services understands the close bonds between people and their pets and sincerely regrets such losses,” R. Andre Bell, a spokesman for the US Department of Agriculture, said in a statement. “Wildlife Services has removed M-44s in that immediate area … and is completing a thorough review of the circumstances of this incident … to determine whether improvements can be made to reduce the likelihood of similar occurrences happening in the future.”

The clothes Canyon was wearing when the explosive went off now sit in a sealed plastic bag since the Mansfields are unsure what to do with them.

The Mansfields said nobody from the US Department of Agriculture has contacted them to apologize for what happened. They wonder if other explosives may be hidden in the hills surrounding their home.

“If you plant bombs by our house, just tell us,” Canyon said. “By the grace of God I’m still alive.”

His parents hope no other families have to go through what they have.

“300 yards from this swingset next to my house there were 2 cyanide bombs. It kills anything. It almost killed my child and it did kill my dog,” Mark said. “I don’t want it to kill my neighbors.”

Theresa added, “Canyon is lucky to be alive. Thank God. Thank God that he is OK.”

It is disturbing the USDA can legally plant deadly devices on private property, and even more disturbing they don’t have to tell the landowner about it.

In the Middle of a Devastating Hurricane, House Republicans Look to Make Cuts to...