Home Ecology and Environment The Bee is Officially on the Endangered Species List – Anti Media... 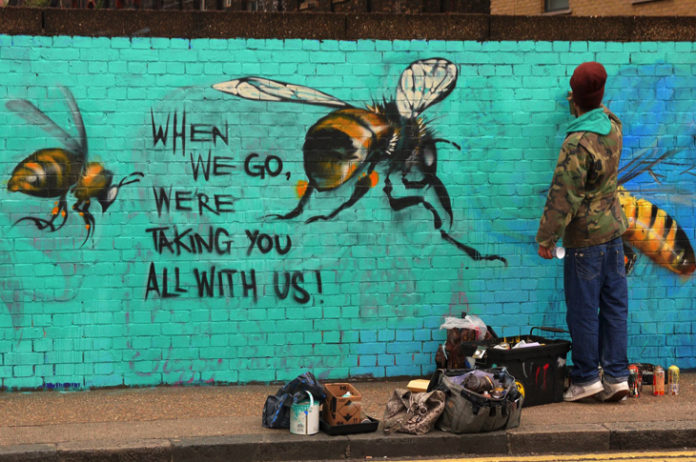 When the bee becomes extinct, what will humanity do? It sounds like a drastic question, but once the bee ceases to exist expect many fruit and vegetable agricultural sectors to collapse. Crop yields would dramatically decline, and it is likely that up to one third of the foods we consume, including apples, oranges and even coffee, would fast disappear.

We wouldn’t face extinction ourselves, but wide spread famine and economic hardship – particularly for those in the food industries – would be on a global scale.

The BBC reported in 2014, that as far as important species go, the bee sits right at the top of the list. Of the “100 crop species that feed 90% of the world” bees pollinate around 70 of those crops. Couple that with the loss of plants and the animals that eat those plants, you start to see the big food chain picture. There are currently 7 billion people to feed in this world and suddenly our critical link to feeding humanity is on the brink of snapping.

Pesticides and climate change are two reasons amongst others threatening the survival of the bee.

Currently, the rusty patched bumblebee in the US has recently been officially declared as endangered as of Jan. 11, this year. The U.S. Fish and Wildlife Service (USFWS) is developing a recovery plan to help rescue this flying insect, by encouraging people to provide habitats and to reduce the use of pesticides, but is it too little too late?

Only small patches of this bee remain in 12 states. Associated Press has reported adecline in the populations since the late 1990s as a whopping 87 percent. Once found in over 31 eastern states and in the southern parts of Canada, the situation really is dire.

Forbes, at the time of writing, has reported the decline to be more substantial – 95 percent. That’s an 8 percent decline – if the figures are correct – in only a few months. The bee was to be listed on the Endangered Species Act immediately, but the current Trump administration delayed the date to Feb. 10.

This is a historic decline, because, as Forbes reports, the rusty patch bumble bee was the first bumble bee species to be recorded in the United States. The “agricultural shift from small family farms producing a variety of crops to huge corporate monopolies that produce just one or two crops have destroyed vast stretches of available habitat fragments filled with native wildflowers and terrain that feed and house bumble bees and other native pollinators.”

And for those who choose to argue that pesticides aren’t harmful to this particular species of bee, backing themselves with the studies currently available, the USFWS states the pesticides have only ever been tested on “domesticated commercial honeybees.”

“Using [honeybees] as proxy for all the bee species in North America is not appropriate,” a conservation biologist with the Xerces Society, Rich Hatfield, said.

Putting dislike for the big corporations aside, the bee is also suffering from disease. But again, it is argued this is caused by the commercially reared bees infecting the native bee. Climate change is also having a big influence, too.

And the rusty patch bee isn’t the only winged creature facing a quick demise. InAustralia and Europe, a decline in native bees has been recorded.  The United Kingdom is also suffering a similar fate, with crops such as carrots, apples, cabbages, pears amongst others, being at risk of collapsing.

This is a worldwide problem with a serious domino effect. When one eco-system collapses, other nations won’t be able to pick up the slack because they’re verging on similar crisis’ too.

In North America, 1 in 4 bee species is threatened with extinction, or over 700 species – at a “breakneck pace.”

Up to $577 billion in crops faces (mind the pun) extinction.

The EPA – that organization Trump slashed funding to by 25 percent – discovered “poison in the honey,” when investigating Colony Collapse Disorder. Neurotoxic plastic spheres, to be exact; due to pesticide use. The findings suggested an old EPA “misguided policy” suggesting chemicals weren’t harmful, spread across the world like wildfire.

And don’t think for a second the butterfly will pick up the slack either. They’re also facing a similar fate. Then what?

Why do we entrust our governments again? Remind me.

Twitter Suspends Fake Accounts after Trump Thanks Propaganda Bot For Its Support – Anti...