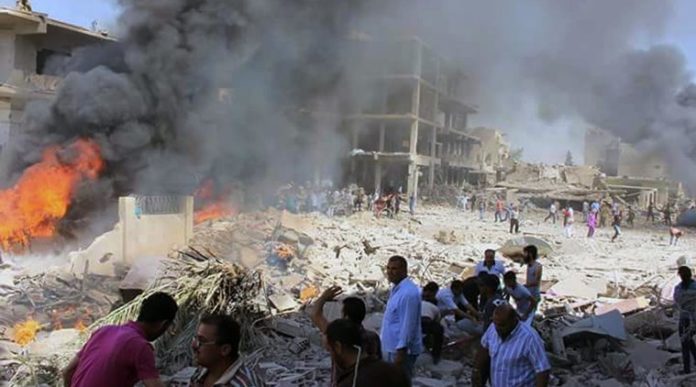 For those who thought the terrorist drone strikes slaughtering civilians under the Obama administration were bad, you will be appalled by the numbers under Trump.

A non-profit organisation that tracks civilian casualties caused by airstrikes in the Middle East said it has shifted nearly all of its resources to track a surge of claims regarding US-led strikes in Syria and Iraq, reported The Independent.

The group, called Airwars.org, had been tracking deaths caused by both Russian and US airstrikes but said it is suspending its work on “alleged Russian actions in Syria — so as best to focus our limited resources on continuing to properly monitor and assess reported casualties from the US and its allies.”

“Almost 1,000 civilian non-combatant deaths have already been alleged from coalition actions across Iraq and Syria in March – a record claim,” the statement said. “These reported casualty levels are comparable with some of the worst periods of Russian activity in Syria.”

In the last week, three mass casualty incidents have been attributed to US.-led forces in Iraq and Syria, making March one of the deadliest months for civilians in the war against ISIS. Following the standard practice, the U.S. claims it will investigate the civilian deaths, but nothing is expected to come of the investigations based on a track record from similar incidents over the past few decades.

Last week, US drones targeted what locals deemed a mosque in Aleppo province in a bid to target al-Qaida leaders. US officials said dozens of terrorists were killed, but those on the ground said at least 47 civilians also died in the strikes. The Pentagon denied that there were any civilian casualties but has launched a formal investigation into the incident.

On Monday, a conflict monitoring group, the Britain-based Syrian Observatory for Human Rights, said a strike near Raqqa targeted a school that was serving as a home for multiple families displaced by fighting in the area, killing at least 33. The Pentagon admitted US aircraft were operating in the vicinity but, according to Pentagon spokesman Eric Pahon, the military is having a hard time rectifying the location of the building that was targeted with what was shown as destroyed on social media.

On Thursday, Iraqi media reported that an airstrike in Mosul killed at least 230 people.

The Independent continued their analysis of Airwars reports:

After the fall of Aleppo to Syrian and Russian forces in December and the recent escalation of the US-led campaigns against ISIS in Mosul and Raqqa, claims of civilian casualties caused by American-led forces have outstripped those caused by Damascus and the Kremlin, according to Airwars.

Airwars uses varying methods to investigate and confirm civilian casualties, relying on a medley of local news outlets, NGOs, civilian volunteers and social media to determine if casualty reports are fair, weak, contested or disproved. For March, nearly half the alleged strikes are contested, according to Airwars data.

According to Airwars, more than 2,500 civilians have been killed by the US-led coalition, which has admitted to killing only roughly 220 civilians. In recent months, the Pentagon said it has taken strides to investigate a backlog of claims while starting to release monthly civilian casualty assessments.

Airwars has decided to focus on the biggest threat to civilian life with their limited resources.

“The decision to temporarily suspend our Russia strike assessments has been a very difficult one to take,” Chris Woods, the director of Airwars, said in a statement. “Moscow is still reportedly killing hundreds of civilians in Syria every month. But with Coalition casualty claims escalating so steeply – and with very limited Airwars resources – we believe our key focus at present needs to be on the US-led alliance.”

The U.S. Is supposed to be an example for the rest of the world.  All this is telling people is that it is OK to blow up civilians. Trump is flexing his hypocrisy by ordering these terrorist attacks while trying to ban Muslims in America because there is a possibility one of them may decide to become a terrorist.

Hundreds Of Thousands Gather In Massive Protest To US Sponsored Saudi Terrorism In Yemen...