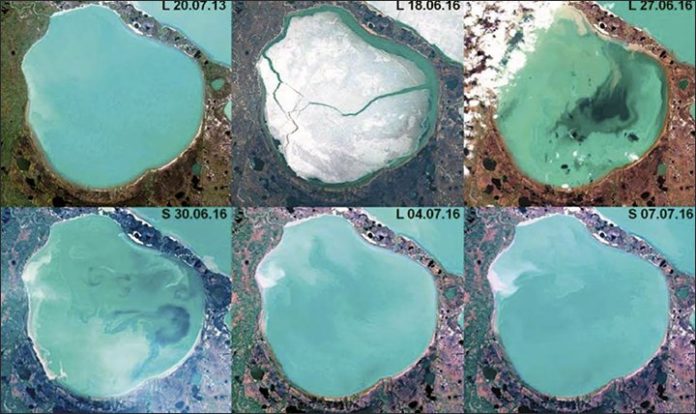 Satellite images have revealed more than 200 strange, bright blue lakes in Russia’s Arctic regions that are bubbling “like jacuzzis” as a result of leaking methane gas.

Science Alert reported the lakes are a type of thermokarst lake, which form when thawing permafrost causes the surface to collapse and fill in with meltwater. But unlike normal, dark thermokarst lakes, these are bright blue and bubbling, because of methane that’s leaking into them before escaping into the atmosphere.

According to Vasily Bogoyavlensky, from the Russian Academy of Sciences, these newly identified thermokarst lakes appear near oil and gas deposits on the Yamal and Gydan peninsulas in Siberia.

Their bright blue color is attributed to algae that grows because of the high sulphur levels caused by the leaking methane.

You can see the surface of one of these lakes between 2013 and 2016 as photographed by the Landsat-8 and Sentinel-2 satellites: 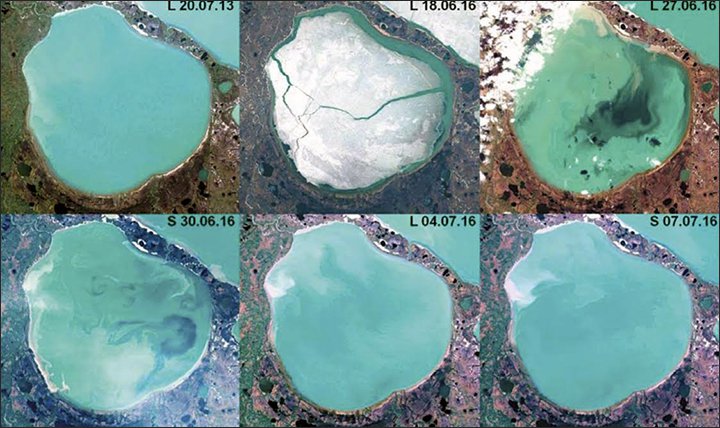 “These lakes have a number of features, which can help identify them from a distance,” Bogoyavlensky said.

“The anomalous blue colour of water, the presence of craters on the bottom and gas seeps in the water, the traces of gas in the seasonal ice cover, as well as active coastal erosion and permafrost swelling near the water’s edge.”

Science Alert continued their report on the lakes:

Bogoyavlensky and his team identified the strange new lakes after studying satellite data from 2015 and 16, and are now monitoring them as an active source of methane emissions.

They appear to be similar to pockmarks and craters found on the floors of some of the world’s oceans, which are also known to be slowly leaking methane stores.

Siberia is no stranger to thermokarsts – Siberia’s massive hole known as the ‘Doorway to the Underworld’ is one of these craters that’s now become so large that it’s unearthed entire ancient forests.

But researchers hadn’t seen anything like these lakes in the region before.

They aren’t entirely sure what’s causing them, but the hypothesis for now is that it could be related to seismic activity.

“For example, over one of the gas deposits (in Yamal),  lakes are located along two lines … looking like a giant cross,” Bogoyavlensky told the Siberian Times.

This suggests “genetic connection of craters with deep faults in the Earth’s crust, but to confirm we need to conduct thorough seismic research”.

What’s interesting is that the satellite data suggests the leaks are happening year-round in these regions, even at temperatures close to 0°C (32°F).

You can see lakes in the region of the Bovanenkovo and Kruzenshternskoye gas fields in the Landsat-8 images below (the left is visible colors, the right is an infrared image). 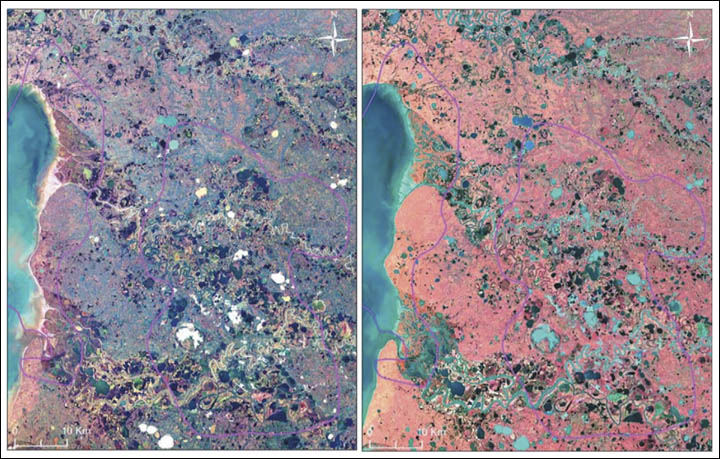 The research continues, but at this time they are not certain what’s going on with these strange blue lakes. Scientists will continue to experiment in the region to find answers.

Methane is roughly 30 times more potent than CO2 as a heat-trapping gas, which could have major implications in the global warming department.

One study estimated that by 2100, up to 205 billion metric tons of carbon emissions will be released by permafrost if climate change continues to intensify.

The discovery of the lakes comes the same week as researchers announced that they’re closely monitoring around 7,000 gas bubbles or ‘pingos’, which have formed in Siberia and are at risk of exploding to form huge craters.

Previous research had suggested that a global temperature rise of 1.5°C (2.7°F) would be enough to start the melting of Siberia’s permafrost, and scientists are concerned that these lakes and pingos are a sign it’s already happening.

Marina Leibman from the Institute of Earth Cryosphere at the Russian Academy of Sciences told the Siberian Times that Siberia experienced a very warm summer last year, and we might still be seeing the effects.

“As a result, the expeditions of 2017 will be aimed at assessing the changes associated with this warming,” she said.

Siberia seems to be going through a lot of potentially global impacting changes. By monitoring them, we can better predict what may be happening in our climate’s future.

Former Vice President Joe Biden Regrets Not Running for President, Believes he Could Have...

New FCC Chairman Ajit Pai Is Out to Destroy the Internet as We Know...