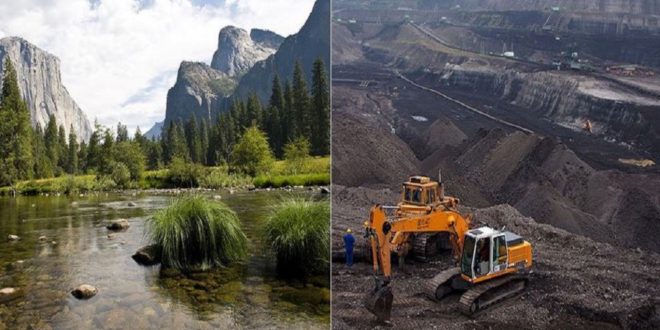 Zinke signed the repeal on Wednesday while surrounded by fellow Republicans and lobbyists.

The Hill reported Zinke said the repeal means the Bureau of Land Management can now resume the process of allowing new coal-mining leases on its land under the guise of increasing energy independence.

“Rather than doing the social cost of carbon, you have to look at the social cost of not having a job too. All of us want clean air and clean water. And we’re going to make sure we ensure that.  This is also a full-scale review, looking at making sure we support the president’s objective of the energy independence policy.”

Environmental groups slammed the Trump administration’s policy, and Earthjustice and a coalition of other green organizations sued Interior immediately over the coal leasing order after Zinke signed it.

“No one voted to pollute our public lands, air or drinking water in the last election, yet the Trump administration is doing the bidding of powerful polluters as nearly its first order of business,” Earthjustice attorney Jenny Harbine, the lead litigator in the case, said in a statement.

“Our legal system remains an important backstop against the abuses of power we’ve witnessed over the course of the past two months,” she said. “That’s why we’re going to court to defend our public lands, clean air and water, and a healthy climate for all.”

In February, the GOP wrote legislation to repeal regulations to the the National Park Service’s ability to oversee private oil and gas companies that want to operate in split-estate national parks where the government owns the parkland, but can lease the mineral rights underneath the land for extraction.

Zinke’s fellow Republican, Sen. Steve Daines (R- MT), was one of those present to witness the historic rollback.

“Coal is such an issue for us back home. We have more recoverable coal than any state in the United States. It’s been a huge source of jobs, economic growth and, importantly, tax revenues for our schools and infrastructure. So this is good news for Montana and good news for America.

Experts also doubt that Trump’s policies will have any significant effect on job creation or energy independence.

The Trump administration continues to destroy our country for the sake of corporate profits. This endeavor will create few jobs, and will destroy national parks and wildlife refuges while increasing carbon emissions which contribute to global warming.  This seems like a bad move for a lot of reasons.

Petition to Remove Health Care Subsidies for Congress and Their Families Reaches 500,000 Signatures...

The American Health Care Act Is A Wealth Grab, Not A Health Plan –...