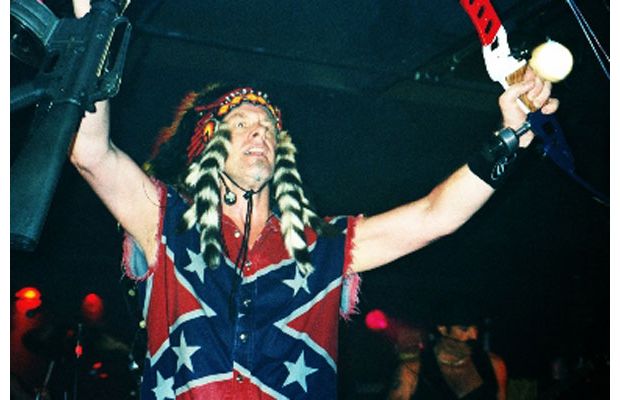 The Right Wing musical icon Ted Nugent said that Native Americans who have been speaking out against the rocker, protesting his concerts are nothing but “stinkyass unclean dipsh*t protestors.”

He was scheduled to play at a Native American owned casino in Worley, Idaho, but the First Nation that operates and owns the casino canceled the event after they heard of Ted’s racial remarks.

But rather than distancing himself from racially-offensive comments he’s made in the past, Nugent was proud of himself:

“I take it as a badge of honor that such unclean vermin are upset by me and my positive energy.

“By all indicators, I don’t think they actually qualify as people,” Nugent explained of the Native Americans who disagree with his racism. “There has always been a lunatic fringe of hateful, rotten, dishonest people that hate happy, successful people.”

Three additional concerts have been canceled since then.

Nugent took to his Facebook page to continue ranting about Native Americans from the United Urban Warrior Society in Rapid City.

“WE ARE ON OUR JET NOW HEADING FOR TOLEDO RIBFEST JAM AFTER AN INSANE INCREDIBLE OUT OF BODY ULTRAROCKOUT at the Full Throttle Saloon in Sturgis SD!” Nugent wrote, according to Media Matters. “Simply astonishing gig! 4 stinkyass unclean dipshit protestors that admitted they hate me AND ALL WHITE PEOPLE THAT STOLE THEIR LAND BULLSHIT!!”

“See, it aint me they hate, they hate all Americans that produce & live the American Dream. Simply insane!”

Despite outrage in the American Indian community against Nugent, he insists that he is not a racist and that American Indians are his “BloodBrothers.”