Home Animals Fish and Wildlife Are Considering A Horse Hunt On The Navajo Nation... 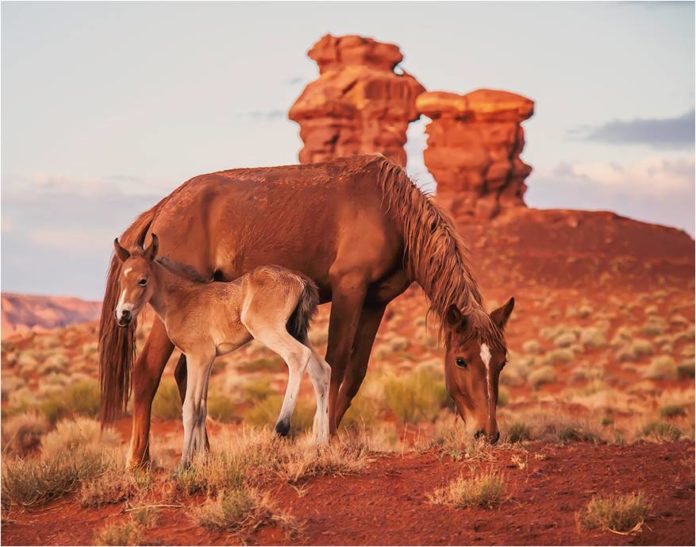 After multiple failed attempts to reduce the wild horse population on the Navajo Nation, officials are now considering hunting them.

The Navajo Nation Department of Fish and Wildlife asked hunters and sportsmen for their support for a hunt as a potential means to reduce the number of wild horses on the Navajo Nation at the 2017 Navajo Nation Sportsman’s Expo on March 25. NNDFW staff confirmed after the conference that a proposal has not yet been completely drafted, so the department hadn’t yet anticipated details of how the possible hunt would work such as weapons to be used, number of tags to take horses, and hunt unit maps, according to Navajo Times.

NNDFW manager Gloria Tom said the department hoped to address the problem and would propose a solution to Navajo Nation governance once drafted, but also called on the hunters present to add their voices to the conversation around the feral herds and what to do about them.

“Our leaders, they really need to hear from people like you,” Tom said. “People who live out there, people who hunt.”

She said previous attempts to trap, round up, or to have horses adopted had not made as large of an impact as they wanted. NNDFW officials said the department is drafting a proposal to get support from Navajo Nation leaders.

Tom considers the wild horses to be the equivalent of stray cats and dogs.

“I compare this problem to our cat and dog problem,” she said.

National Geographic reported, “Failing to manage wild herds in Western states, experts say, could have devastating effects on rangelands—and all of the animals that depend on them.”

Child Pornography Found At The Vatican

University Says Students’ Video of Police in Pig Masks Being Beheaded Is Protected By...

Russia Is Deceiving US Far-Right And It’s ‘Definitely Part Of Something Bigger’ – Anti...