Home News Amazon Echo Turns Off When Owner Asks if Connected to the CIA...

Every day, the latest inventions make our lives easier and interactive. Whether owning a smart fridge, smart security systems or cool looking, decorative smart interactive assistants, all of them have one thing in common: to make life easier.

But they’re connected to the internet, too. The downside of these smart devices is they tend to store your voice and usage patterns on the cloud, which if you think about it, can be used against you one day.

When contemplating the sinister side of your devices, one smart device that hooks into the internet springs to mind: Amazon’s Echo – a smart interactive assistant named Alexa. Alexa, when asked if it has a connection with the CIA, chooses not to answer its owner in a video posted on Twitter.

The woman asks the smart device whether she would lie to her, to which Alexa quickly responds that she would always try to be truthful. Alexa is then asked to give a definition of what the CIA is, which is answered with accuracy. It’s then followed by another question from its owner, “Are you connected to the CIA?”  Alexa, rather than answer, chooses to switch off, not once, but twice, when the owner of the device repeatedly asks.

Since then, questions have been raised about Amazon’s product. Amazon’s response is that it’s nothing but a minor programming error.

Amazon says they’ve now fixed the problem. Currently, if you ask Alexa if it’s connected to the CIA – it responds that it works for Amazon – hardly convincing.

Some viewers are of the opinion that the machine was unable to understand the woman’s question when she asks Alexa if its connected to the CIA. It seems a fair enough thought, but the machine, when not knowing an answer shouldn’t shut down, but rather have responded by saying ‘could you repeat your question’ or it ‘didn’t understand the question’.

So far, Amazon has declined to comment on the type of technical error.

The eerie video came only days after WikiLeaks published the CIA’s hacking methods and tools in the Vault 7 release.

Matt Novak, a journalist for Gizmodo took the liberty of contacting the FBI, asking them if they were wiretapping Amazon Echo.

The FBI responded to him with a letter saying, “This is in response to your Freedom of Information Act (FOIA) request. Please be advised that, upon reviewing the substantive nature of your request, we can neither confirm nor deny the existence of records to your request pursuant to FOIA exemption (b)(7)(E) [5 U.S .C §552 (b)(7)(E)].”

Makes you think, doesn’t it? 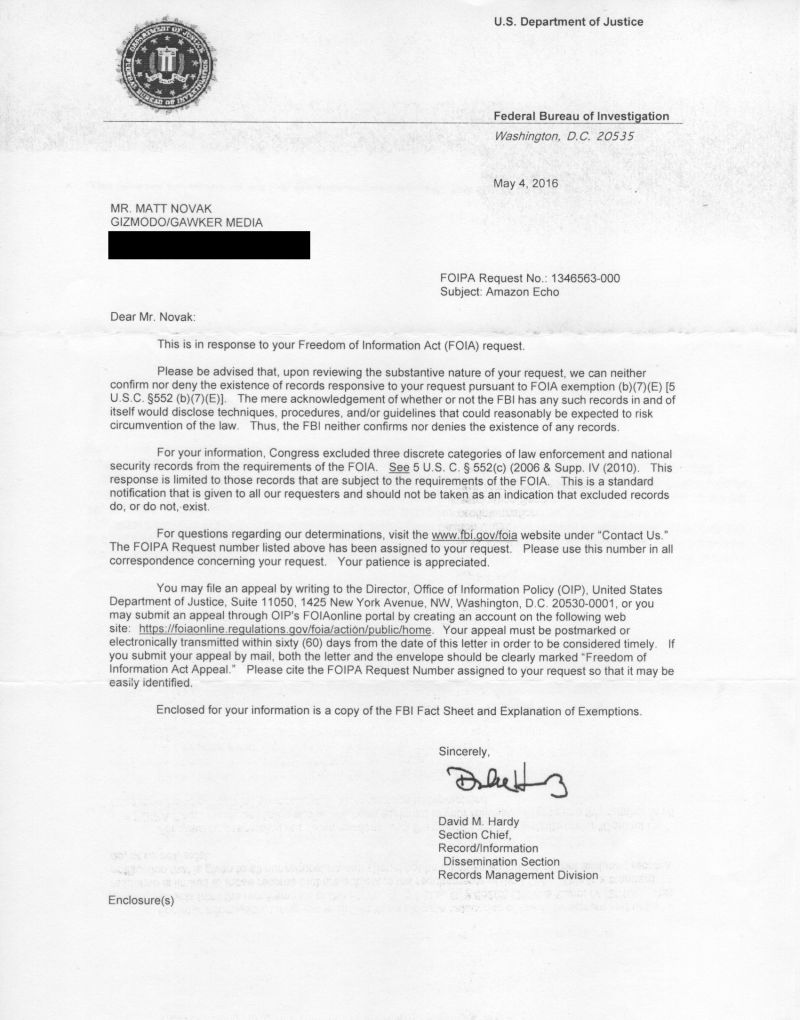 White Supremacist Leader Congratulates Trump: ‘We Did It!’