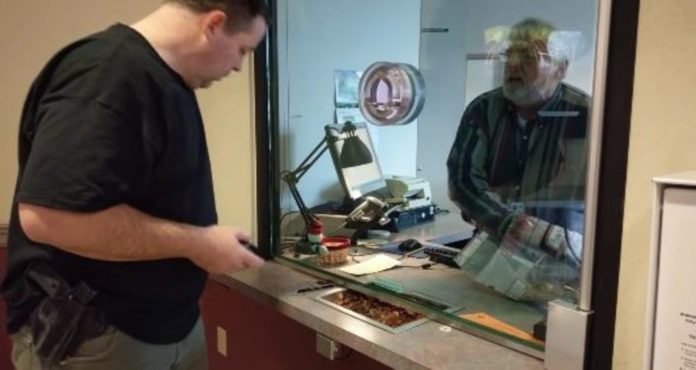 New Hampshire cops, with a member of the SWAT team, forced a Marine Corps veteran out of city hall last Monday for trying to pay a parking ticket with pennies.

Manchester police not only violated the Coinage Act that states all coins are legal tender, but also violated his friend’s First Amendment rights by claiming he needed their permission to record the interaction.

Billy Spaulding knew they were within the limitations of the law, but ultimately submitted to being kicked out of city hall on March 27.

On March 31, after teaching Manchester police about the law, Spaulding was allowed to pay his $75 parking ticket.

PINAC reported Spaulding paid his ticket on Friday, but found himself at the police department later that day to complain after the mother of a Manchester police officer who began trolling his Facebook page by calling him a “dumbass” and telling the veteran her son is a hero.

“You call yourself a Marine….please,” wrote Kelley Catanzaro, the mother of Manchester cop Ryan Hardy.

Ryan Hardy was not present during either interaction Spaulding had with police while attempting to pay his fine, but his mother felt the need to troll his Facebook page anyway.

Spaulding, who has a legal license to carry a firearm, told PINAC he was forced to walk through a metal detector Friday after he opted to refuse a search by police at the Manchester police station, where New Hampshire law specifies it’s not legal to open carry.

After being told he could not record during the first attempt to pay, Spaulding’s friend recorded the entire interaction of  Spaulding paying his fine in pennies while open carrying.

“Part II, they didn’t except it the first time. I went down to the Manchester Police Department. They said they have to take it,” Spaulding says. “The parking coordinator is not going to like me. But the law is the law.”

Video of the first interaction was cut short due to police telling Spaulding’s friend he could not record at city hall .