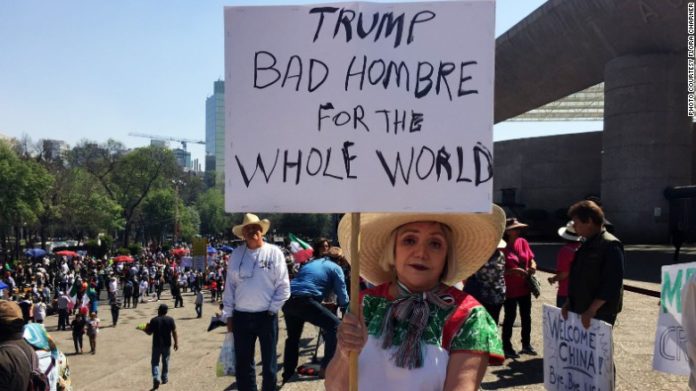 With the increase in open racism in the U.S. under President Trump, the American tourism industry is expected to face new difficulties. People from many countries, especially Mexico, are expected to forgo trips to the U.S. in favor of going to countries that are considered more friendly to visitors.

For decades, the U.S. has been a popular destination for vacationers worldwide, but the election of Trump seems to have changed that. Experts warn that anti-immigration rhetoric as well as unconstitutional travel and electronics bans have reduced foreign interest in U.S. vacations, especially from Mexico.

“We have Twitter wars with our President and former President of Mexico… There is lots of speculation in the media about a trade war with Mexico,” says Douglas Quimby, of Phocuswright, a travel research firm. “If that happens, what kind of impact does that have on millions of middle class Mexicans looking to take a trip?”

Mexican sentiment for the U.S. has been lagging since the primary elections when then-incumbent Donald Trump claimed that Mexican immigrants were rapists and drug dealers. There were reports of Trump piñatas, angry newspaper op-eds and anti-Trump murals. During the presidential debate, Mexicans held drinking games, knocking one back every time their country was mentioned.

At the same time, Canada has made it easier than ever to visit. In June 2016, Canadian Prime Minister Justin Trudeau announced visa-free travel for Mexicans. Since the policy was first announced, Mexican tourism to Canada has been skyrocketing, increasing 16%, according to ForwardKeys, a travel trend predicting firm.

When visa-free travel was enacted in December, Mexican visitors increased 82%, a “dramatic response” that FowardKeys attributes to the changes in the law. At the same time, the firm says that bookings to the U.S. have been down 9 percent, despite the dollar weakening against the Mexican peso, which usually drives tourism. Overall, the long-term economic impact could be staggering.

They attribute this drop to strained relations between the two countries, as well as anti-immigration rhetoric calling for “travel bans” and “extreme vetting.” Visitors are also concerned about border policies and if they will be required to provide social media and computer passwords upon entry.

Although America continues to be an aspirational destination for hundreds of millions, travel industry experts worry about the longterm economic effect of the White House’s nationalistic messaging. One in nine jobs in the U.S. rely on the tourism sector, according to the US Travel Association. The same study found that direct spending by travelers totals $2.6 billion a day.

“There is a lot of uncertainty about what is to come,” says Quimby. “There is consensus that there is concern.”

Not only do we have to pay, more than once, for Trump’s wall, we will also be losing at least $1.6 billion a year (just from Mexican citizens) because of his open prejudice and racist rhetoric.

Do You Still Eat Baby Carrots? After Reading This, You Won’t! – Anti Media...