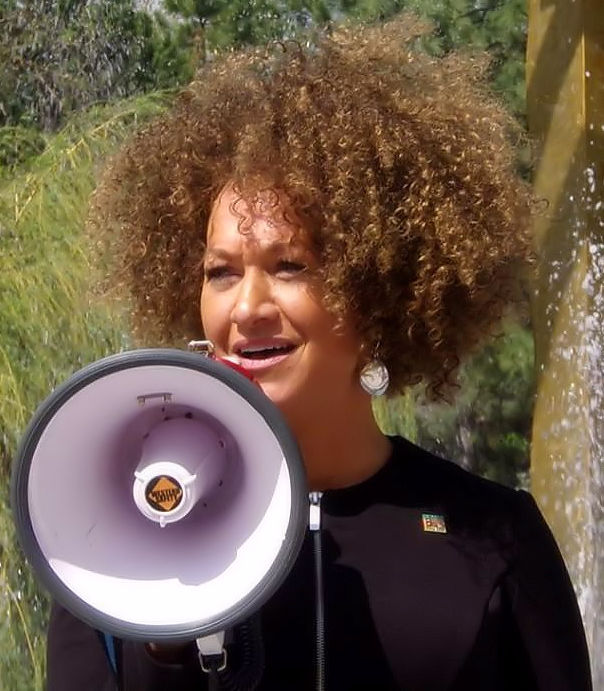 Rachel Dolezal is one of the most polarizing public figures in recent memory. For many, especially blacks in America, she is someone who can’t go away fast enough. Rachel first made headlines when she was “outed” as white by her parents after having posed as a black woman for years, even holding the prestigious position of NAACP president of its Spokane, Washington chapter.

Since the shocking reveal, Dolezal claims to be near destitute, and has lost her employability due to the scandal- not owning up to the fact that it was all her doing- silencing the true voices of black women’s voices by taking their place, profiting off her false narrative.

Still, she remains steadfast in her gross cultural appropriation by continuing to pose as black, and has even gone to the extent of changing her name to Nkechi Diallo (one with African and Islamic origins) and making claims such as she was “too black” for her ACTUALLY black ex husband, she clearly has yet to get the message.

She has gone on o write a book:  “In Full Color: Finding My Place In A Black And White World”. Using her “white” name, I wonder why? Her ability to bounce back and forth between her identities is not something true people of color can do, and it is the epitome of her white privilege that she can do so.

Her newest attempt to stay in the limelight however, is a new low for even Rachel. She is now claiming that by her being “transracial” (which isnt a thing, by the way-) that she is being discriminated against more than someone who identifies as trans, speaking specifically of Caitlyn Jenner.

Rachel Dolezal changed her name to Nkechi Diallo. But she’s using her white name on her new book. I wonder why.
Vid: https://t.co/MIgttB9ZxI pic.twitter.com/GrV2Xq4HS1

Rachel Dolezal has said that she faces more stigma being “racially fluid” than transgender people do.

The controversial former professor, who previously came out as bisexual, said in an interview with Salon that she believes she is less accepted than transgender people because she is “transracial”.

Dolezal said she drew the comparisons because her white identity was revealed at the same time as Caitlyn Jenner came out as transgender.

She said: “What’s not similar is the stigma right now. There was stigma [for being transgender] in the past, for sure, and that still perpetuates.

“But there’s more acceptance for gender fluidity than there is for race fluidity right now, and I don’t think anybody would deny that.”

Dolezal, who became a talking point after the world learned that she was actually white in 2015, said that transracial people will become more societally accepted one day – just as LGBT people are.

She added: “There was a time when we did call transgender, and even gay and bisexual, people crazy — and [said they had] mental health issues and all these clinical terms — just stigmatised and rejected [them].

“Maybe we will evolve and grow, and racial fluidity will become a thing in 20 years? I do hope that inclusivity does expand to all people of all stripes.”

Dolezal came under fire earlier this week for comparing herself to transgender people on BBC Newsnight.

The comments sparked anger from writer Guilaine Kinouani, who said that “comparing transgenderism with trans-racialism is a fallacy.”

Dolezal continues to insist she did not “lie” about her race.

She said: “It didn’t feel like a lie… the idea of race is a lie, so how can you lie about a lie?

“It felt like a true representation of who I am and what I stand for. Even though race is a social construct, you have to take a side and I stand on the black side of issues. For me to not check that box would have been some sort of betrayal.

“I definitely did not feel at home in the white world. It felt foreign to me and it felt uncomfortable and awkward to be there. It also felt oppressive because I had to constantly repress parts of myself in order to survive socially.”

If the idea of race is a lie, why is it that she is claiming to be of a particular race?  Why would it be so important to her to identify as black and appropriate abd profit off the components of the black race, black experience, and black culture if they are not real?

Rachel Dolezal’s new book, In Full Color, hit bookshelves Tuesday. Will you be reading what about what she has to say about her “racially fluid” experience? Let us know in the comments below.

Black Man Found NOT GUILTY BUT He’s Was Jailed For 10 Years Anyway! –...