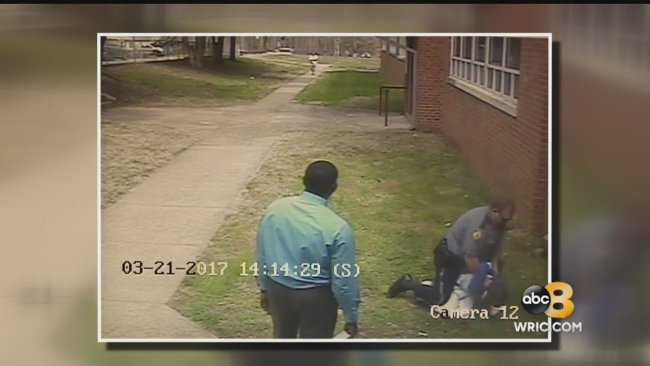 Displaying his lack of training, self-control, and humanity, this school resource officer tackled and pinned a special needs child to the ground before handcuffing him. If schools choose to have officers in them, then it is important for them to have some sort of training so this type of thing stops happening.  There is no need to treat any kid with this kind of violence, especially someone with special needs.

WRIC 8 News reported on the incident:

The officer can be seen pinning down the struggling boy for more than 5 minutes before two additional officers arrive to escort Lamarion Crawley away.

The seventh grader told 8News things have gone back to normal at Moody Middle School. His mother, Lateisha Green said the officer is no longer there, but added that she believes that is not enough.

Crawley is slight, quiet, and weighs less than 100 pounds. When asked what he wants to be when he grows up, he said he’d like to be a football player. The security video shows the student getting tackled, cuffed and held down like an adult suspect on March 21.

“The people that are responsible should be able to stand up and say this was wrong,” Green said.

Crawley has mild autism and other learning disabilities. Green said she was told her son became upset after his computer was taken away at school. The security footage obtained by 8News begins with Crawley walking outside the building and beginning to throw twigs before being confronted by administrators, then the officer.

“No child should have to go through being dealt with that way at school.” — Lateisha Green

“No child should have to go through being dealt with that way at school,” Green said, telling 8News that she met with administrators on March 31 about the excessive use of force. “The principal said I’m sorry and talked about, ‘where do we go from here.’”

Green said the unnamed officer has been reassigned to a different school, but that she wants him off the job.

“Honestly I don’t think (reassignment is) enough, because Lamarion was injured, and he’s still hurt,” she told 8News, claiming her son has battled persistent back pain since the incident.

School officials have remained tight-lipped about the confrontation.

“We continue to work directly with the student and his family in order to determine all of the facts and address the concerns that were shared with us. We are unable to provide information regarding the school division’s work to address the stated concerns due to protections that are afforded to students under the Family Educational Rights and Privacy Act (FERPA).”

One question Green said no one seems able to answer, is why the officer took things so far.

“The principal said, ‘I don’t know what was going through his mind.’ No one is able to answer that question as to what he was thinking at that moment to handle (Lamarion) that way.”

A  officer that treats a child this way should be allowed to keep his job.  Green was right when she said reassignment is not acceptable. If the situation is not further addressed by the school, it will just happen again and someone else will be injured, maybe more seriously next time. The school needs to do something, whether it is training/ retraining, anger management classes, firing him, or something else. Simple reassignment does not address the issue and only lets other officers know they can abuse a child and still keep their job.

MONSANTO AND BAYER ARE MANEUVERING TO TAKE OVER THE CANNABIS INDUSTRY – Anti Media...

“I will ******* cap you!”: Florida Cop Arrested After Assaulting, Threatening To Murder Man

Jaw Dropping Study Shows Cannabis Helps A Whopping 90% Of Epileptics Who Try It...