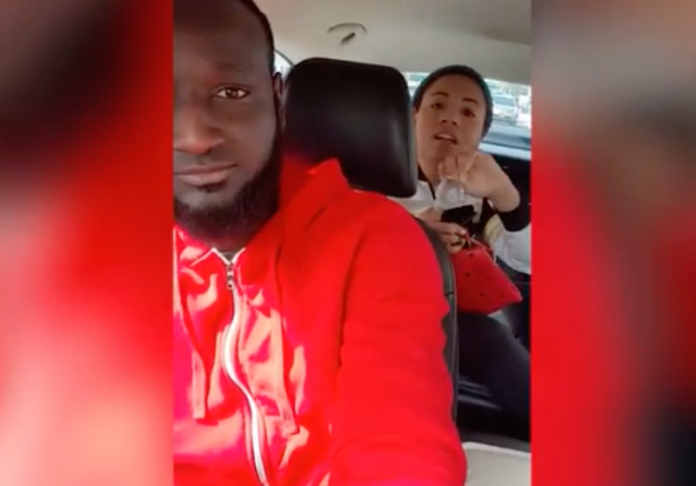 We continue to see more and more racists going off on innocent people when the bigots believe they are in a safe zone and in a position of power. This time, cell phone video potentially saved an Uber driver from false rape accusations by a Trump supporting racist.

A disgusting Bronx, N.Y. woman who was caught on cellphone video threatening to call the police and falsely accuse an Uber driver of rape has been permanently banned from using their services.

“The behavior in this video is abusive and completely unacceptable,” an Uber spokesperson said in a statement, reported The Root.

The video below shows the unidentified female passenger spewing slurs and curses at the male driver for several minutes.

“I’m going to start screaming out the window that you’re raping me, that you raped me,” she says.

“I will punch myself in the face and tell the cops you did it,” she adds. “You wanna play?”

The woman tells the driver, “Go back to your country” and says, “Donald Trump going to send you and your family back. Get the fuck out of my country.”

The incident seemed to drastically escalate because the driver did not have an iPhone charger.

The conversation continues as the driver continues to record and even smiles at the camera.

“I was taking you to your destination until you started talking shit,” he says, just before the woman realizes that the footage is being recorded.

“Why are you recording me?” she yells, while punching the man’s seats. “He just hit me in my face!”

The driver says that the passenger is free to “make up whatever lies [she] wants” before the woman eventually gets out of the car.

Uber said in its statement about the incident: “As our Community Guidelines make clear, this will not be tolerated by anyone who uses Uber. The rider’s account has been banned and Uber is looking into this incident.”

Neither the driver nor the rider have been publicly identified.

Whistleblower “Singled Out For Retaliation And Retribution” For Exposing Pentagon’s $850,000,000 Disappearing Act –...