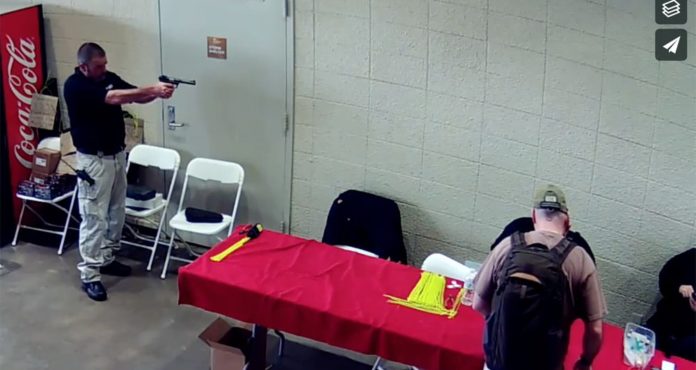 An security Guard in Oklahoma was hired to keep people safe during the Wanenmacher’s Tulsa Arms Show. Instead, he pulled out a loaded gun, pointed it towards people, and pulled the trigger, hitting a former deputy who was also working as a security guard at the event.

Brian Pounds, the shooter, is not a cop, but he was wearing a shirt that says “police” on the back.

Pounds claims the incident was an accident, but a surveillance video obtained by the Oklahoma news site, The Frontier, shows it more of an act of stupidity, ignorance and negligence.

He will not face criminal charges because the victim, former Tulsa County Sheriff’s Sergeant Rick Treadwell, did not want to file charges against him.

Treadwell, Pounds and Skiatook Police Chief Pat Dean were working security at the Wanenmacher’s Tulsa Arms show over the weekend, Treadwell said. The show bills itself as the world’s largest gun show, but stresses that loaded firearms are not allowed inside the Expo Square arena where the show is held.

The Frontier acquired surveillance footage of the shooting on Thursday which shows Pounds remove the handgun from a bag, and handle it for a few seconds before pointing it in the direction of Dean and Treadwell before pulling the trigger.

A flash is visible from the handgun’s muzzle, and Treadwell, seated at a nearby table, immediately leaps from his seat and grabs his hand. Treadwell told The Frontier earlier this week that the bullet struck him in the middle finger, where it remains lodged. He said the bullet ricocheted off the wall before striking him.

Pounds then places the handgun on the table and reaches for his walkie-talkie before other personnel arrive.

Treadwell said he was taken by ambulance to a nearby hospital for the wound.

It is crazy to think this man will not even face charges for what he did. He could have easily killed someone. Do you think he should face charges even though the guy that got shot is forgiving?  Let us know in the comments below!

Congress Is Coming After Your 401(k) – Anti Media News