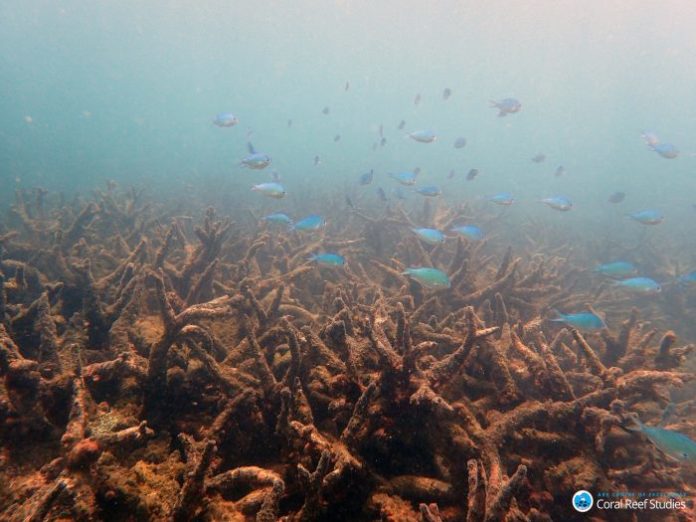 For the second consecutive year, severe bleaching events have negatively affected two-thirds of Australia’s Great Barrier Reef according to a new aerial survey.

While severe bleaching events have occurred three other times in the past 20 years — in 1998, 2002 and 2016 — this year marks the first time it’s known to have happened two years in a row. Scientists say the damage is caused by higher water temperatures due to global warming.

This is causing alarm among scientists who say the back to back bleachings, which have affected a 1500 km stretch, will give little to no time for the damaged coral to recover.

Where last year’s bleaching was concentrated in the reef’s northern third, the 2017 event spread further south, and was most intense in the middle section of the Great Barrier Reef. This year’s mass bleaching, second in severity only to 2016, has occurred even in the absence of an El Niño event. 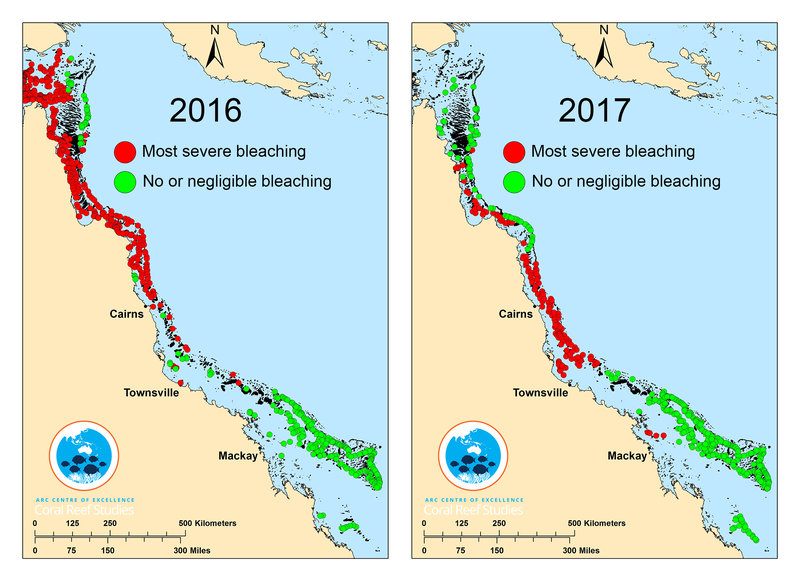 Mass bleaching is only known to have happened 4 times in recorded history and is caused by global warming-induced increases to sea surface temperatures, reported NPR.

Bleaching happens when coral is exposed to higher than normal water temperatures. The unusual conditions “cause corals to expel tiny photosynthetic algae, called ‘zooxanthellae,’ ” the ARC Centre said. “The loss of these colorful algae causes the corals to turn white, and bleach.”

Prof. Terry Hughes, who led the surveys, expressed concern over the amount of time the coral takes to recover. It takes 10 years for the fast growing coral to recover from a singular bleaching event.

“The significance of bleaching this year is that it’s back to back, so there’s been zero time for recovery,” Hughes told the Guardian. “It’s too early yet to tell what the full death toll will be from this year’s bleaching, but clearly it will extend 500km south of last year’s bleaching.” 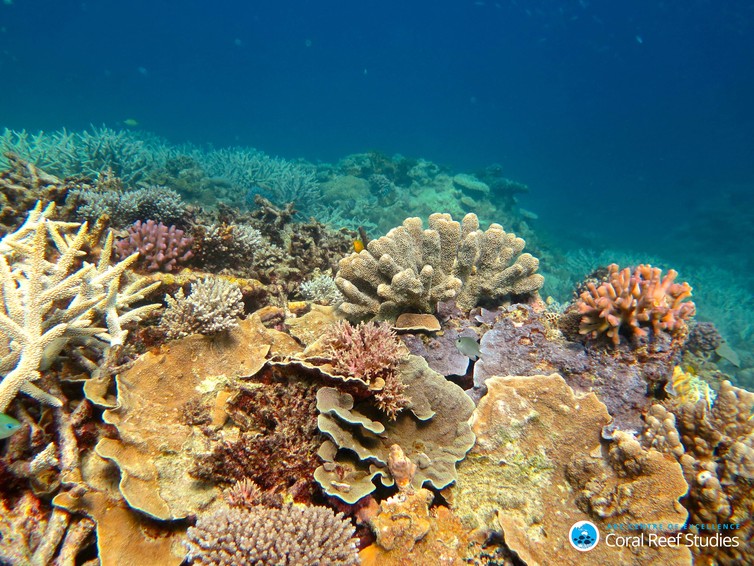 Last year, about two-thirds of shallow-water corals were lost, and Hughes warns that we haves a short time frame to try to halt global warming and save the reef.

The 2017 bleaching is likely to be compounded by other stresses on the reef, including the destructive crown-of-thorns starfish and poor water quality. The category-four tropical cyclone Debbie came too late and too far south for its cooling effect to alleviate bleaching.

For the affected reefs to recover, they need to be connected to coral that was undamaged by the bleaching according to The University of Technology Sydney’s lead reef researcher, marine biologist David Suggett. That connectivity seems to be in jeopardy because of the back to back bleachings.

“It’s that connection ultimately that will drive the rate and extent of recovery,” Suggett said. “So if bleaching events are moving around the [Great Barrier Reef] system on an annual basis, it does really undermine any potential resilience through connectivity between neighbouring reefs.” 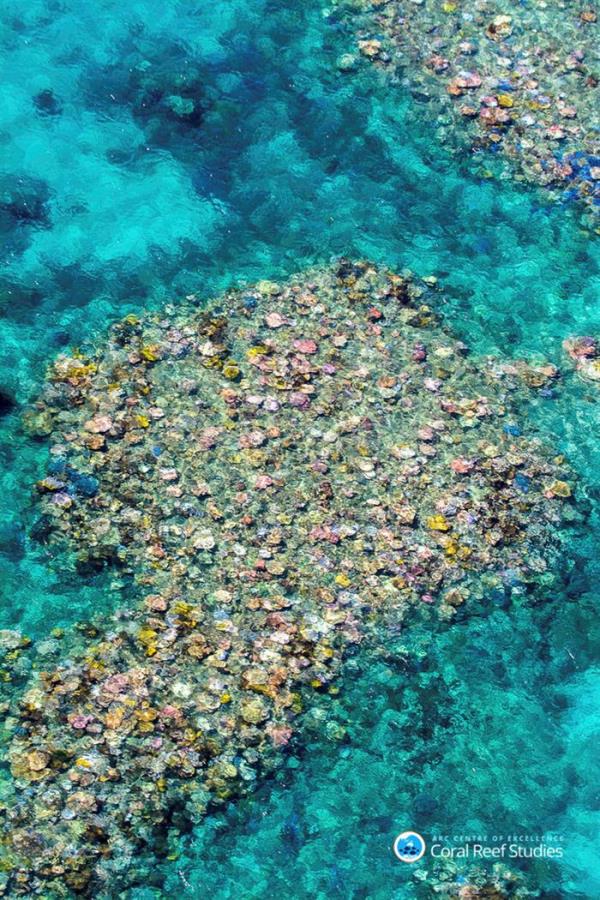 Water quality expert, Jon Brodie said the reef is in its “terminal stage” and measures to improve water quality were failing.

“We’ve given up. It’s been my life managing water quality, we’ve failed,” Brodie said. “Even though we’ve spent a lot of money, we’ve had no success.” 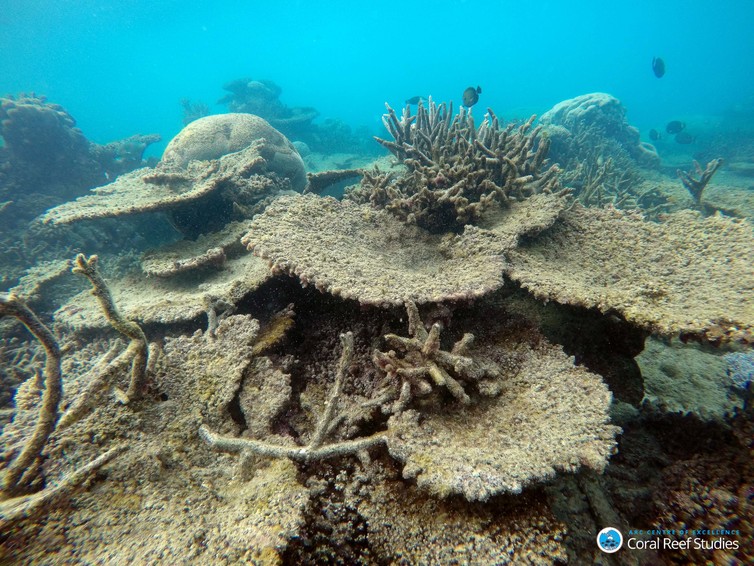 Others remain optimistic, out of necessity. Jon Day was a director of the Great Barrier Reef Marine Park Authority for 16 years until retiring in 2014. He believes the government failed to protect the reef because of lack of funding and because of their insufficient approach to fishing, run-off and pollution from farming, and the dumping of maintenance dredge spoil.

“You’ve got to be optimistic, I think we have to be,” Day said. “But every moment we waste, and every dollar we waste, isn’t helping the issue. We’ve been denying it for so long, and now we’re starting to accept it. But we’re spending insufficient amounts addressing the problem.”

Has Trump Been Secretly Stripped of His Presidency? – Anti Media News