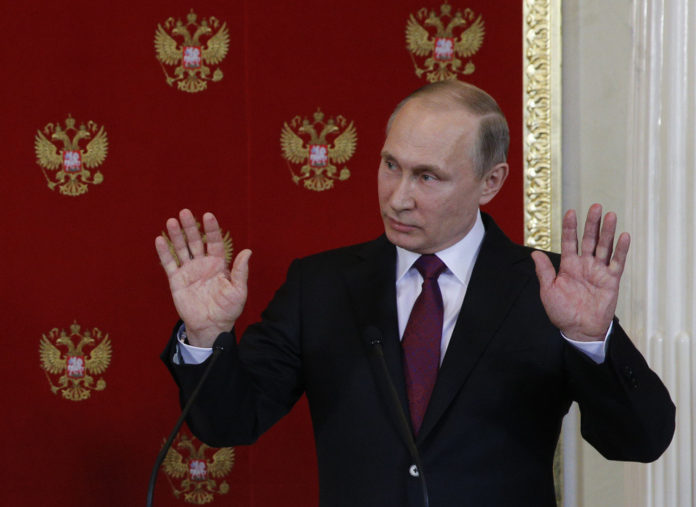 According to Russian President  Vladimir Putin, Russia has information about a pending attack on Damascus that will be orchestrated by opposition rebels who will use chemical weapons and it will be blamed on Syria’s Bashar al-Assad in an attempt to frame him.

Putin referred to suburbs in the south of the Syrian capital which he suggested would be the target of the strikes, according to The Independent.

He also connected the false flag attack that led to a US strike on a Syrian air base last week with false claims about weapons of mass destruction that were used to justify the 2003 invasion of Iraq, saying: “We have seen it all already.”

The Russian leader warned of the worst relations between Moscow and Washington since the end of the Cold War.

Speaking to reporters on Tuesday, Mr Putin said he would appeal to the Organisation for the Prohibition of Chemical Weapons to investigate the recent alleged chemical attack in Syria.

“We have information from different sources that these provocations – I cannot call them otherwise – are being prepared in other regions of Syria, including in the southern suburbs of Damascus where there are plans to throw some substance and accuse the official Syrian authorities,” Mr Putin said, after holding talks with his Italian counterpart Sergio Mattarella.

He also noted some countries support the US air strike on Syria simply to build closer relations with the Trump administration.

Putin made the comparison of the false flag Syrian chemical attack and the false claims about WMD in Iraq by Saddam Hussein which was used as justification for an ongoing invasion of Iraq.

Putin said, “It reminds me of the events in 2003 when US envoys to the [UN] Security Council were demonstrating what they said were chemical weapons found in Iraq.”

Putin supports an actual investigation of the gas attack before retaliation without evidence.  U.S. Congresswoman Tulsi Gabbard recently came under fire for requesting evidence before bringing America into another war, which shows the U.S. leaders are looking for more invasions and increased military spending.

On the investigation into the chemical attack, Mr Putin said: “We plan to turn to the United Nations bodies in The Hague and call on the global community to thoroughly investigate into this incident and make balanced decisions based on the investigation’s outcome.”

It makes sense to have evidence before a retaliation. The fact that the vast majority of the U.S. leaders refuse to even look for evidence is deeply concerning, especially because of “retaliation” against someone who is less likely to be responsible for the attack.